In Parashat Lech-Lecha, God promises Abraham that he will be the father of a great nation. Abraham’s hope for the future was embodied in his son Isaac, but in this week’s portion, Chayei Sara, as the patriarch nears death, the prospects for a dynastic family seem dim. Isaac and his wife Rebecca have yet to even conceive a child.

Similarly, in Haftarah Chayei Sara, King David must deal with the future of his own dynasty. When the book of Kings I opens, David is ill, and the infirmity of old age is setting in: “Even though they covered him with bedclothes, he never felt warm” (Kings 1:1). His servants’ idea for a cure? To find a young woman to “be his nurse [and] to lie close to him and keep him warm” (1:2). They search for a suitable candidate, and find a Shunammite woman named Abishag.

Meanwhile, King David’s son Adonijah makes a play for the throne, and declares himself king, backed by an army of 50 men. Adonijah was not the oldest of David’s sons (Absalom was), but he was cunning. He carried out his coup with the aid of some of the priests–though, the text notes, not all of them–and offered sacrifices as a way to solidify his position. Adonijah invites three of his brothers to witness this ceremony — all except Solomon, who is kept ignorant of his ascension.

Nathan the prophet, who is listed among those who did not support Adonijah, came to Batsheva, Solomon’s mother, to warn her. “Let me give you advice that will save your life, and the life of your son Solomon,” he says, instructing her to inform King David of his son’s preemptive power play (1:13).

Bathsheva obeys. She approaches David while Abishag is attending to him and relates exactly what Nathan told her to say. Then she adds of her own accord: “Now, my lord king, the eyes of all Israel are upon you to tell them who shall sit on your throne when you are gone. If you do not,” she concludes, “then as soon as you are lying with your ancestors, my son Solomon and I will be regarded as traitors” (1:20-21).

As soon as she finishes, Nathan comes to the king. “Could it be that the lord my king ordered this, without telling your servant who will sit on the throne after you?” he asks rhetorically (1:27).

David orders Bathsheva to return. In front of them both, he swears an oath that “Solomon would rule after me…I will carry it out this very day!” (1:30). To this, Bathsheva bows low and replies: “Let my lord king David live forever” (1:31).

Like the Torah portion, the haftarah is concerned with succession, both on a personal level and on a national one. By seizing power and attempting to take over the kingdom for his own purposes, Adonijah showed himself to be an unfit candidate to be king. Like Isaac, Solomon received his father’s birthright despite not being the oldest son. And, just like Isaac, Solomon inherited a destiny that was only beginning to take shape. Before David took his post, Israel had only had one other king. The duties of a king and the path of a young nation, still without a Temple, were still being determined. 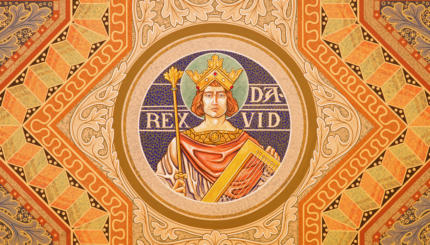