Parashat Devarim begins with the phrase, “These are the words that Moses spoke unto all Israel….” Moses delivers words of reproof, reminding the Children of Israel of their fathers’ wrongdoings during their desert wanderings. Yet instead of going into the details of every sin, Moses merely mentions the places in which the sins took place.

The technique that Moses used teaches us a very important lesson. Each person is responsible for his fellow Jew. Thus, when A sees B doing something very wrong, he has an obligation to do something about it. Reproof is not merely venting anger and frustration, but rather, as Rabbi Nachman says, it is “to bring out the beautiful fragrance within your fellow Jew.” Each person has the potential to be either a great tzaddik, a righteous person, or a rasha, an evil person. The purpose of reproof is to help someone get to the right path or prevent him or her from going astray. The right kind of reproof helps to bring out that ‘beautiful fragrance’ in each person.

There is, however, a very specific way to reprove. The great scholar Rabbi Akiva once said, “I would be really surprised if there is anyone in this generation who can give reproof” (Babylonian Talmud, Erkhin 16b). The purpose of this statement is that Rabbi Akiva recognized how difficult it is to give effective and constructive criticism with sensitivity.

This teaches us that we must be careful to mind how we speak to others. Seemingly “unimportant” words can create or destroy relationships. If we must mind how we speak to each other generally, how much more so when we try to give constructive criticism to a friend! We must, therefore, realize that there is a time and place for everything. One must understand to whom to give reproof, what to say, where to say it, and of course, when to remain silent. We must always be careful not to degrade or embarrass another. A consistent tenet of Judaism is being sensitive to others, and treating those around you the way you would like to be treated.

The Book of Deuteronomy begins with words of reproof and, later, continues with the verse, “And thou shalt keep His statutes.” Nahmanides explains the order: Moses wished to indicate that the Children of Israel were supposed to go up into the Land of Israel immediately after they received the Torah. It was their sins, however, that brought on various setbacks. This idea contains a crucial lesson: although the Children of Israel did sin, and did have to wander the desert for many years, the time again came when the next generation had the opportunity to enter the Land of Israel.

In a recent seminar that I attended, many students and I were told to draw “I.D. cards,” which were to explain who we are to our colleagues. Unaware of what I was doing, I began to draw a tree filled with, instead of leaves, Jewish stars. I soon realized the reason I did this. Leaves on a tree fall off during the winter, only to come back during the spring. So too with our connection to our religion: Sometimes we feel that we are so close to God and that we are totally in the swing of things. Other times, however, we feel like those leaves that dropped away from their source onto the ground. We feel unconnected and lost.

However, there is something to always keep in mind. Leaves end up growing back. Just like it is innate and part of the natural process for leaves to grow back on trees, so too is our religion and connection to God that much a part of our core–though there are always times when we feel so far away, we will always “grow back.”

This story, applied to a historical event, can connect to the idea that after 40 years of wandering, when the Children of Israel were so far away, the nation was still able to “grow back” and once again enter the Land of Israel. Connecting to the other theme of this week’s Torah portion, reproof, watching out for our fellow Jews, speaking nicely and giving constructive criticism in an appropriate fashion can help keep our friends (as well as ourselves) on the right path. And one more person on the right path is one step closer to perfecting our world. 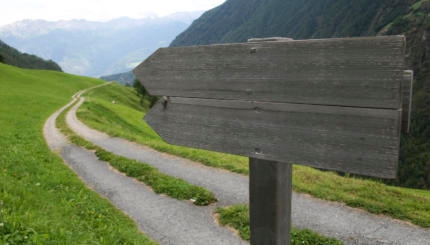 Hope exists in the recognition that the world is changeable.

Moses at the end of his life rebukes the Israelites, who are receptive to his criticisms.