With the exception of Burns and Seinfeld, the majority of successful American Jewish comedians attained popularity by fulfilling widely accepted ethnic Jewish stereotypes, or by employing a manic, burlesque style of humor. In the first half of the 20th century, these expectations were almost impossible for Jewish comics to escape. No career illustrates the limits and possibilities of being a Jewish comedian better than that of Fanny Brice.

Born on the Lower East Side of New York in 1891, the third of four children of saloon-owning immigrant parents, Fania Borach chose a performer’s career early in life. Historian Barbara Grossman notes that, in an era that typically based entertainment on ethnic stereotypes such as the drunken Irishman, the ignorant Pole or the Yiddish-accented greenhorn, Brice’s “Semitic looks” slotted her into Jewish roles. Despite her efforts to succeed as a serious actress and singer, Brice — who spoke no Yiddish — rose to stardom performing comedy with a Yiddish accent. Just as Al Jolson donned blackface to make his mark in show business, Brice affected a Yiddish background she did not possess.

In 1908, dropping out of school after the eighth grade, the gangly, strong-voiced Fanny Borach worked as a chorus girl in a burlesque revue. By the end of that year, she changed her last name to Brice. Grossman speculates that Fanny probably changed her name to escape limited Jewish stage roles. Ironically, a year later, she would make her first Broadway mark in a musical comedy, The College Girls, singing Irving Berlin‘s “Sadie Salome, Go Home” with a put-on Yiddish accent while dancing a parody of the seductive veil dance in Richard Strauss’ opera Salome. Her act brought down the house. Despite her desire for universality, Brice found her niche as a “Jewish” entertainer.

When Brice stuck to broad farce and Yiddish-accented parodies of other female stars, the critics loved her. When she tried playing non-ethnic roles in Broadway plays, they panned her. Brice starred in the Ziegfield Follies in the 1920s and ’30s and became known for her beautiful voice and limber grace, which she always used in the service of humor. She tried dramatic Broadway roles, but the critics thought her plays unsuccessful.

As Brice’s fame increased, so did her notoriety. In 1918, she married Jules “Nicky” Arnstein, a handsome, urbane, but somewhat inept con man and thief she had lived with for six years. Despite Arnstein’s infidelity and a stretch in Sing Sing Prison for illegal wiretapping, the devoted Brice stayed married to him, had two children and supported him by working on stage almost constantly, almost to the very end of each pregnancy. Brice’s tumultuous relationship with the ne’er-do-well Arnstein gave her material for a rare non-ethnic success: appearing the Ziegfield Follies of 1921 the usually manic comedienne stood nearly motionless on the stage and, singing in a beautiful, unaccented voice, moved audiences to tears with her rendition of “My Man,” with its now-classic lyrics, “But whatever my man is, I am his forever.”

In 1924, Arnstein was charged in a Wall Street bond theft. Brice insisted on his innocence and funded his legal defense. Arnstein was convicted and sentenced to the federal penitentiary at Leavenworth, Kansas. Released in 1927, the ungrateful and unfaithful Arnstein disappeared from Brice’s life and that of his two children. Reluctantly, Brice divorced him.

Brice had some of her greatest success during her years as Mrs. Arnstein, including her famous song “Second Hand Rose.” Yet, in 1923, as biographer Grossman puts it, Brice “tired of being a sight gag” and had her nose surgically straightened. Still, acceptance eluded her when she tried to her hand at “American” drama, while she continued to draw raves for her work in comedic dancing and song.

Finally, after a failed marriage to Broadway impresario Billy Rose and starring roles in Hollywood films, Brice found a medium, “broadcast radio,” that made her comfortable. In 1938, she launched her own weekly radio show. A wonderful mimic and impersonator with a great ear for dialect, Brice chose instead to limit herself to one character, Baby Snooks, a precocious, bratty toddler. Her enormously successful run on radio lasted until her death in 1951, just as television was beginning to capture the radio audience.

Barbra Streisand paid tribute to Brice in her loosely biographical film production Funny Girl, in which Streisand was both star and producer. Lily Tomlin popularized a Baby Snooks-like character on television, Edith Ann, who sits in a rocking chair and makes ironic observations on the adult world. Both stars possess a freedom to choose roles that eluded Brice once she was slotted as Sadie Salome. Just as significant, the acceptance of Jerry Seinfeld’s matter-of-fact Jewishness by a national television audience illustrates the great liberation that American Jewry, male or female, has gained in the world of entertainment. Fanny Brice would have approved.

Jewish homemakers mobilized the women of the Lower East Side to protest the increasing meat prices.

An inspirational person doesn't have to be a role model. 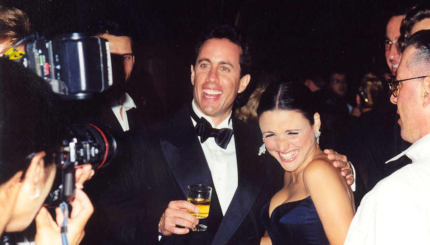