For many American Jews, the fourth Thursday in November is a chance to gather with family, eat copious quantities of turkey and stuffing, and perhaps pass out during an afternoon football game.

Most American Jews regard Thanksgiving as more akin to the Fourth of July than Christmas, devoid of religious associations and offering an opportunity to fully embrace a distinctly American tradition. The holiday’s focus on gratitude — hardly a concept foreign to Jewish thought — also provides a comfortable overlap between Jewish and American values.

Yet for a minority of Jews, the embrace of any non-Jewish holiday ritual poses challenges. In the last century, Jewish religious law authorities were called upon to determine whether it was acceptable for observant Jews to partake of Thanksgiving observances. The main issue hinges on a general prohibition in Jewish law, based on a verse in Leviticus, that is generally understood to bar copying “the ways of the Gentiles.” (It’s this principle that leads some Orthodox authorities to take issue with certain types of body piercings.)

Whether this principle applies to Thanksgiving turns entirely on whether it’s considered a “Gentile” holiday or a secular American one. Rabbi Moshe Feinstein and Rabbi Joseph Soloveitchik, two leading 20th century Orthodox legal authorities, both agreed that Thanksgiving was not a religious holiday, though their views are not universally accepted within the Orthodox world. One notable dissenter was Rabbi Yitzchok Hutner, who considered Thanksgiving innately Christian and forbidden to Jews.

But the general consensus is that there is no problem in Jewish law with eating turkey and observing the other traditions around Thanksgiving provided they aren’t construed as obligations, which would imply a kind of religious status. Yet merely permitting Jews to observe Thanksgiving does not equate to encouraging them to do so.

Among haredi Orthodox Jews, Thanksgiving is not widely observed. The Agudath Israel of America, the leading haredi umbrella organization, routinely schedules its annual convention to begin on Thanksgiving day — perhaps because its members are less likely to have to work that day. And many Orthodox institutions and schools operate as usual on Thanksgiving.

But among the broader American Jewish community, Thanksgiving is widely celebrated and even embraced as an opportunity to lean into Americanness. In the 19th century, it was not uncommon for synagogues to hold services on Thanksgiving, as was the custom for a time among American churches. Historian Jonathan Sarna asserts that Thanksgiving is one of four annual holidays — Passover, Hanukkah and the Fourth of July are the others — that together promoted what he called a “cult of synthesis,” the idea that Judaism and Americanism reinforce one another. According to Sarna, some two dozen Jewish Thanksgiving sermons were published in 1900 evoking this idea.

Vestiges of this remain today. New York’s Central Synagogue offers a model of a Thanksgiving seder on its website, and the Reform movement’s Religious Action Center offers a page of resources to introduce a Jewish consciousness into Thanksgiving observances. Some have even suggested that the Puritan settlers modeled Thanksgiving on the Sukkot festival, also celebrated around the time of the fall harvest. It might not be entirely accidental that the Hebrew word for thanksgiving — hodaya — is not too dissimilar from the Hebrew word for turkey: hodu.

So What Do Jews Eat on Thanksgiving?

When I was in high school, I was dating a lovely (non-Jewish) guy whose parents seemed vaguely confused by my ...

Are Thanksgiving and Halloween "kosher"? 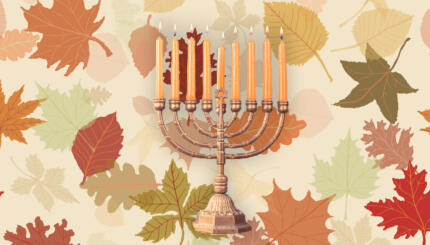 We’re Basically Getting Another Thanksgivukkah This Year

And we are very excited for menu planning.