Daniel, a prophet, visionary, interpreter of dreams, and high official in the Babylonian administration, was, according to the prophet Ezekiel, one of the three righteous men; the other two were Noah and Job (Ezekiel 14:14).

Daniel, a young man from a noble Jewish family that lived in exile in Babylon, was selected with three other boys–Hananiah, Mishael, and Azariah–by order of King Nebuchadnezzar to take a three-year instructional course that would prepare them to serve in the Babylonian administration. Daniel was given the Babylonian name Belteshazzar.

In order not to transgress by eating and drinking ritually forbidden food and wine, Daniel asked the steward who had been placed in charge of them by the chief of the eunuchs if they could eat only legumes and drink only water.

The steward feared that this diet might endanger their health, but Daniel convinced him to let them try it for ten days. By the end of the ten days, the four Jewish boys looked better and healthier than the boys who had eaten the king’s food.

The King’s Dream of Conquer

Over the next three years, the four boys acquired knowledge and skill, and Daniel learned to interpret and determine the significance of visions and dreams. The king examined the four boys after their instruction ended and found them to be ten times better than all the magicians and astrologers in the kingdom.

Sometime later, the king had a disturbing dream but could not recall it. He summoned his magicians to his presence and ordered them to tell him what he had dreamed and then to interpret it. The magicians replied that it was impossible to comply with his request. The king flew into a rage and gave orders to Arioch, the captain of the king’s guard, to kill all the wise men of Babylon.

When Arioch came to kill him, Daniel asked for an explanation. Arioch told him about the king’s demand, and Daniel requested some time to study the matter. That night the king’s dream was revealed to Daniel in a vision. The next morning, he spoke to Arioch and asked him to take him to the king so that he could interpret the dream.

Daniel told the king that he had dreamed of a great statue, its head made of gold, its breast and arms of silver, its thighs of brass, its legs of iron, and its feet partly of iron and partly of clay. In the dream, a stone was thrown at the statue, which then broke into small pieces that were blown away by the wind. The stone grew into a great mountain that filled the whole earth.

Daniel explained that the head of gold was Nebuchadnezzar himself and that the rest of the statue, made of different materials, represented successive kingdoms that would be swept away by the kingdom of God, which would last forever.

The astonished king acknowledged the supremacy of God and, to show his gratitude and appreciation, appointed Daniel governor of the province of Babylon and head of all the wise men in the kingdom.

Daniel also had visions of his own in which he saw grotesque creatures, which symbolized different successive kingdoms. But his visions also showed that one day the kingdom of God would be established and last forever.

The King’s Dream of his Downfall

Sometime later, King Nebuchadnezzar made a large idol of gold and invited all the princes, governors, and leading personalities of the kingdom to come to the dedication of the image. During the celebration, a herald proclaimed that all should fall down and worship the statue upon hearing the sound of musical instruments. Shadrach, Meshach, and Abed-nego, however, refused to worship the golden idol.

Nebuchadnezzar had the three men brought to him and said that if they continued to refuse to worship the idol, he would have them thrown into a fiery furnace. The men still refused and so were thrown into the furnace, which was so hot that it burned to death the men who pushed them in.

An angel came into the furnace and protected Shadrach, Meshach, and Abed-nego from injury. The amazed king told them to come out of the fire, recognized the supremacy of God, and decreed that nobody should dare speak against God.

The king had another dream. This time he dreamed of a tree of great height with beautiful foliage and abundant fruit, which a holy man ordered to cut down and leave just the stump of the roots.

Daniel, asked to interpret the dream, told Nebuchadnezzar that the king was the tree, and that God would make him eat grass like an animal and live with the beasts of the field.

A year later, while the king was boasting of his power, a voice from heaven told him that the kingdom had departed from him and that he would dwell with the beasts of the field and eat grass as oxen do. The king became insane and thought that he was an ox. Later, when the king had recovered his sanity, he praised God and was restored to his former exalted position.

The Writing on the Wall

Years later, Belshazzar, who was by then the ruler in Babylon, invited 1,000 guests to a great banquet, where he and his wives drank from the gold and silver utensils that Nebuchadnezzar had taken from the Temple when Jerusalem was conquered.

While the men and women at the feast were praying to idols and getting drunk, a hand wrote a mysterious message on the wall. No one, including the king’s astrologers and counselors, was able to read or understand the message.

The queen suggested that Daniel be brought to the palace. He was promised gifts and a high position in the royal court if he could interpret the writing on the wall. Daniel refused the rewards but explained the message:

“Mene, mene–God has numbered your kingdom and finished it–tekel–you have been

weighted in the balances and found wanting–peres–your kingdom is divided and given to the Medes and the Persians (Daniel 5:26–28).”

The king gave the promised gifts to Daniel. Later that night, Belshazzar was slain, and Darius the Median became the king of Babylon. Daniel was named one of the three top ministers of the new king.

Some officials were jealous and envious of Daniel but could not find a valid cause to discredit him. They managed to persuade the new ruler to decree that, for the next 30 days, anybody found making any petition to God or man, except to the king, would be put to death. Daniel was observed praying to God. His enemies did not waste any time reporting this to the king.

The king was reluctant to punish Daniel but, unable to change the decree, had him thrown into a lion’s den. The next morning, the king, who had fasted the whole night, rushed to the lion’s den and was happy to see Daniel coming out unhurt. He had the accusers thrown to the lions and decreed that everybody in the kingdom should revere God. 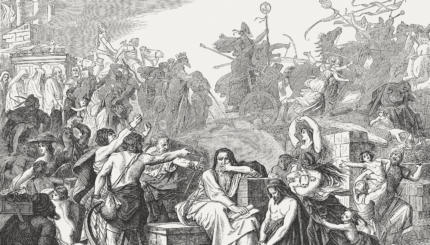 The Temple's destruction, the transfer of leadership to Babylon, and the Persian return to Israel reflect the larger political conflicts of the ancient world.

Ezekiel promises: The divided kingdoms of Judah and Israel will one day be united.

Why we fast on the anniversary of his death.