The portion of Korach is named for the rebellious Levite Korach who started a dispute over the issue of kedushah. The concept of kedushah is central in Judaism, and its meaning can have profound impact on the environment today. Kedushah or the corresponding adjective, kadosh, are usually translated obscurely as “sanctity” or “holy”; its real meaning is: devotion to a sublime ideal.

We Are All Kadosh?

In our portion the Torah tells us that, following his demagogic presentation, there was no longer room on earth for Korach; the earth swallowed him up. At the core of his claims was the statement: “The whole community is kadosh (Numbers 16:3).” That does not sound so terrible — does it? After all, we need go back only four verses from here to read God’s demand “. . . you shall be kadosh,” But really it is terrible. The obligation to be kadosh is central to the teachings of the Torah and should guide us in all aspects of our lives to strive toward kedushah. But if you are already kadosh, there is no more need to strive. Thus Korach’s complacency pulled the rug from under the Torah, and his arguments were rejected.

What does it mean to strive constantly for kedushah? The first time the commandment to “be kadosh” appears in the Torah, Nahmanides quotes the Midrash which explains that most of the body of Torah law ‘hangs on’ this commandment (Leviticus 19:1). He explains further that the idea of being kadosh follows the specifications of what foods and relationships are forbidden in the Torah. He teaches that we may be fooled into thinking that as long as what we are consuming is permissible, the amount that we consume doesn’t matter.

According to Nahmanides, one who abuses the resources of the world with the rationale that these resources are not forbidden, is called “naval bereshut haTorah,” a ‘vile person within the delineations of the Torah.’ Nahmanides writes that to prevent such over-consumption, the Torah adds the general commandment of kedushah, “…that we should be separated from excess…in these and similar issues.” The importance of the goal of kedushah in preventing over-consumption is connected in the very persona of Korach, who claimed that the Jews were already kadosh.

The Torah tells us that the earth swallowed up “all the people of Korach and all their possessions.” Our sages wonder, why were the possessions mentioned here explicitly? They explain that Korach was a very wealthy man and that this wealth caused the arrogance that brought him down. Wealth is an important tool in human hands enabling us to fulfill our task more effectively. But, if not used properly, it can cause our downfall — and even destroy the world.

The kedushah concept is central, not only to Judaism, but to environmental preservation as well. Specifically, the kedushah concept can be the key issue for problems caused by our habits of over-consumption, which defeat our attempts to achieve sustainability.

Early considerations of sustainability pinpointed unchecked population growth as the greatest threat to the world’s sustained survival. The rate of growth of world populations, they argued, could not be matched by increases in food production.

More recent research has found that a factor of considerably greater importance is the average individual consumption, which is increasing at a much faster rate than that of population growth. In the course of thirty years, the world’s population doubled, while energy consumption per capita increased eightfold in this period. We may add to this the fact that in North America and Western Europe, ten percent of the world’s population consumes fifty percent of its energy.

The danger to the world posed by excessive consumption is serious. Not only does it deplete the world’s energy store, it also is the chief cause of the warming of the atmosphere, through excessive burning of fossil fuels. In other words, the excessively high standard of living in some parts of the world is a major source of today’s ecological crisis.

This overconsumption is also manifest in our use of raw materials. It can even be found in our dietary habits. Note that the production of one kilogram of beef consumes 16 kilograms of grain. Present efforts to stem the tide of over-consumption focus mainly on legislation to impose restraints on the public. But this approach has very limited effectiveness. Auxiliary propaganda drives to recruit public support, too, are largely ineffectual, because they lack a rational basis. The spirit of “After us the deluge!” is difficult to overcome.

All this shows that the root of the problem originates in a selfish world view which inflates personal consumption beyond the essential. Regarding this problem, the Torah instructs us to “be kadosh,”  in other words, to refrain from self-indulgence and luxuries. To appreciate the significance of this commandment, let us, for a moment, take a global view.

The world, with all its myriad components, was put at humankind’s disposal to use and enjoy as we see fit. Without any restrictions, this would quickly lead to total disaster. Accordingly, the Torah provides some detailed guidelines, such as the requirement to respect property rights, marriage regulations, etc. But above all these, the key directive is the commandment: “You shall be kadosh” It instructs us to take from the world that which we need to do efficiently our job of running the world in accordance with the will of its Creator–but no more.

What does this mean in practice? When we prepare to eat a tasty morsel, we are obliged to ask ourselves: will this make me a stronger servant of God? Or, perhaps, am I eating it only because of the enjoyment?

This does not imply that we are forbidden to enjoy the world in order to improve our mood when we feel down or to drink wine on Shabbat to help us attain the joyfulness required for sublime inspiration, etc. Indeed, the Sages already taught: “A person will be called to account for every­thing which his eye saw and he did not eat.”  This surely does not imply that we must eat from everything; but there must be a reason–we have to weigh our decisions.

Every time we walk to the grocery down the street instead of driving, every time we turn off the boiler when we had enough hot water for our shower, we are being “kadosh” and, simultaneously, making a contribution toward sustainability.

A child raised in this spirit will have “the quality of the environment” at his heart and may have more impact on the ecology than legislation imposed on a dissident public. 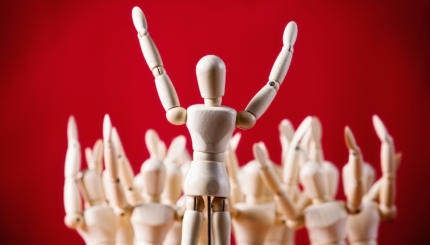 The Torah articulates norms about legitimate dissent and authority's reasonable response to it.

Vengeance cannot be the response to violence.