Like the ancient Israelites taking a deep breath on the last day of the life of Moses, before the upcoming transitions in leadership, we read Parashat Vayeilech every year during a time around the High Holy Days when we seek new meaning and direction in our own lives.

This portion, whose name comes from the Hebrew root for movement, is frequently read together with another portion, Nitzavim, which means standing firmly in place. This juxtaposition implies that, ironically, we move and grow most successfully when we are like trees, firmly planted in a soil rich with experience and tradition, but nurtured alongside living and moving streams.

Parashat Vayeilech contains the last two of the traditional counting of 613 commandments, both of which can connect with the spiritual work we need to do in this transitional period, both for the individual and the community.

In the Torah narrative, Moses completes the writing of the Torah and hands it over to the kohanim, the priests, and the elders. He instructs them to read it to the people at regular intervals, not to keep it to themselves as a private esoteric document. He also prepares and writes down his final “song,” a moralistic epic poem to be read and remembered regularly. It will serve as a witness to the fallibility of the people about to enter into possession of a holy land.

From these texts, the Rabbis extract the following mitzvot, or commandments: (1) the entire people and those who identify with them must be gathered every seven years to hear some specific teachings publicly; and (2) every individual must write down this spiritual legacy.

This second commandment was originally understood to mean that everyone is required to make his or her own copy of the Torah. As Jewish law developed, this was modified to include support for the writing of any sacred literature, whether taken from the “written” Torah or its oral (rabbinic) interpretation.

A less literal expression of this commandment is the creation of an ethical will, a statement of one’s own interpretation of the spiritual lessons we derive from our tradition and wish to pass on to future generations. This tradition of writing an ethical will has a venerable pedigree in Jewish history, extending from ancient times to today, through which Jews act upon the felt obligation to summarize and pass on the lessons of our lives.

The penultimate command of the Torah is referred to as hakhel, meaning “gather” or “assemble” the people. This sabbatical retreat has some very unusual features. The gathering occurs on the harvest festival, Sukkot, following the year in which there has been no harvest — the sabbatical or shmita year, in which the land has been given its rest.

All of the people are expected to assemble: men and women, children and elders–and not only the Jewish people, but also the local non-Jewish residents are invited to participate. In fact, Sukkot, on which the gathering takes place, was in Temple times the most universal of the national holidays, when sacrifices were offered on behalf of all the nations of the world.

The traditional prophetic reading, or Haftarah, which the Rabbis connected to Parashat Vayeilech is taken from Isaiah (55:6-56:8). It contains a précis of universal morality and a strong emphasis on the interconnection of matters of spirit and justice. The prophet declares: “Seek the Eternal while God can be found; observe what is right and do what is just. Let not the foreigner who has attached himself to the Eternal say, ‘The Eternal will keep me apart from God’s people’…for My House shall be called a house of prayer for all peoples.”

Why is this particular gathering designated to be so inclusive, and what are the texts the gathered are supposed to learn? The three segments read are all from Deuteronomy: (1) the recapitulation of Exodus history through the giving of Ten Commandments, and the passages contained in the Shema and V’ahavta prayers (1:1-6:9) (2) the section which describes the relationship of moral human behavior to the ecology of the land (11:13-21); and (3) a potpourri of laws including the intrepid pursuit of justice (tzedek, tzedek tirdof), concluding with the blessings and curses which are the consequences of moral action or inaction (14:22-28:69).

Interestingly, these particular sections parallel the path prescribed in the Talmud for a person who wishes to join the Jewish people: (a) recognize the traumas of the Jewish past; (b) learn some of the laws of justice seeking, particularly the laws pertaining to the responsibility we have toward the poor and vulnerable; and (c) recognize the consequences of moral failure for the earth and its inhabitants.

But even more striking is the fact that together, these very last commandments in the Torah demand that the entire Jewish people periodically re-engage ourselves with our tradition’s core values, and then share our legacy with neighbors–according to Isaiah, with all the nations. 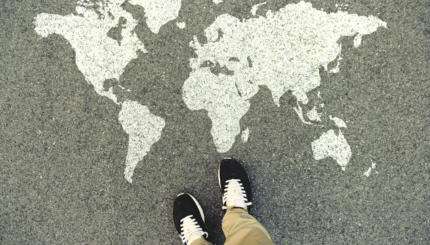 We need more experiences of community in which we feel connected to members of society whom we don't even know.

Justice, expressed in Parashat Shoftim, is one of the eternal religious obligations of Judaism.

Moses concludes his speech to the Israelites, blesses Joshua, and instructs the community to gather every seven years to read publicly from the Torah; God predicts the eventual straying of the Israelites.