The Shema, the quintessential statement of Jewish belief and a fixture of Jewish daily prayer, declares that God is one. But though God reigns supreme and is unparalleled, God is not alone in the heavens. The Hebrew Bible describes God as the “Lord of Hosts” — meaning the Lord of armies. God commands legions not of humans but of divine creatures — namely, angels.

Angels are not just God’s fighting force; they have other functions in the Bible as well. They frequently sing divine praises, serve as messengers between God and human beings and they perform other tasks like judging humanity (consider the job of Satan, the prosecuting attorney) and carrying out divine decrees (think of the Angel of Death who visits death on the firstborn of Egypt).

Cherubim (singular: cherub) are one type of angel. The first mention of a cherub comes early in the Book of Genesis. After Adam and Eve are expelled from the Garden of Eden, God places a cherub, fiery sword in hand, at the entrance to the garden to prevent the rebellious pair from returning to paradise and eating from the Tree of Life (Genesis 3:24).

Cherubim also serve as guardians in the mishkan (tabernacle), God’s portable sanctuary, and later the Temple, God’s permanent home. In the Book of Exodus, God commands that the ark of the covenant, the golden box that houses the Ten Commandments, should be topped by two cherubim sculpted from solid gold, wings extended toward one another and wingtips touching (Exodus 25:18–20). Cherubim are also embroidered into the curtain that covers the Holy of Holies in the tabernacle (Exodus 26:1). In the Book of Kings, the cherubim guarding the Holy of Holies are larger than life. (1 Kings 6:23-28)

In some of the more poetic passages of the Bible, God is described as riding on the back of a winged cherub (2 Samuel 22:11, Psalms 18:11) and cherubs figure into the fearsome and awe-inspiring visions of the prophet Ezekiel where it alternately appears that God is riding directly on the cherubim (Ezekiel 9:3) or perhaps that God’s throne is placed on their backs (Ezekiel 10:16–17).

It’s difficult to square these fierce, winged guardians large enough to wield swords and carry God on their backs with the adorable half-naked babies that are so popular in medieval art. So what’s going on?

The etymology of the word “cherub” is uncertain but some scholars think it comes from the Akkadian word karābu meaning “to bless” (an inversion of the same root, baruch, in Hebrew). Others have connected it to the Assyrian kirubu which is a name for a winged bull.

Despite these indications that connote size and strength, there is a playful midrashic folk etymology — one that is certainly not correct in the historical sense — that connects the Hebrew word keruv (“cherub”) to the Aramaic expression ke revaya meaning “like a child” (according to a statement of Rabbi Abahu in Sukkah 5b). Rashi agrees that the cherubim have child-like faces. This tradition is the origin of the idea that cherubim look like winged babies. 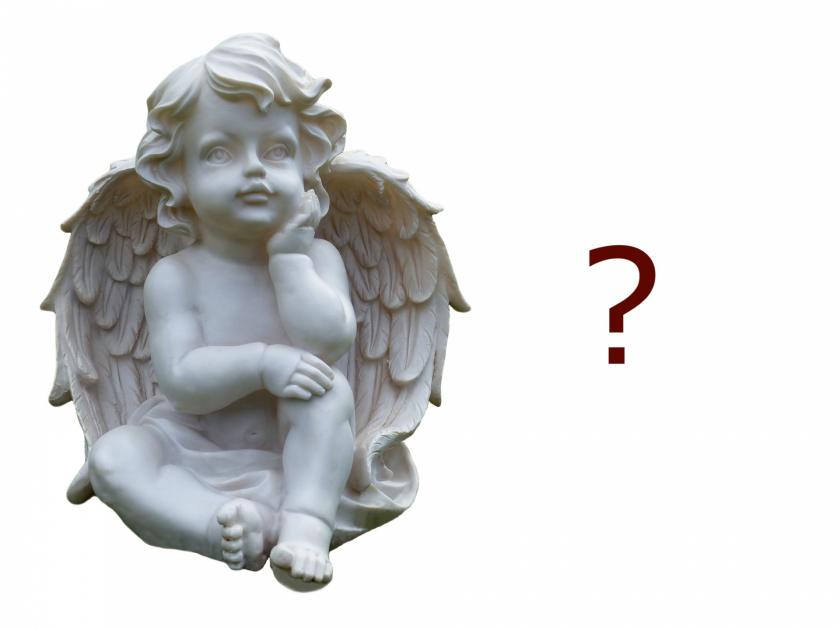 But rabbinic literature is not single-mindedly committed to this image of the cherub as a child. In fact, in that same discussion on Sukkah 5b, Rabbi Abahu’s colleague, Abaye immediately challenges his suggestion that a cherub looks like a child by noting that Ezekiel describes a cherub as having the face of a man (Ezekiel 10:14) — though this text is complicated because Ezekiel is actually describing a four-faced creature that has the faces of a cherub, a man, a lion and an eagle. Also, there is a story about the cherubim that guarded the ark in the Temple, that they were male and female and that they were positioned entwined with one another in a very adult posture — a symbol of the love between God and in Israel (Yoma 74a).

Medieval Jewish philosophers had a penchant for ranking classes of angels, and cherubs had a tendency to fall toward the bottom of those lists. For Maimonides, they were the ninth of ten angelic types, coming just above the ishim, the most human-like angels. This lower status of cherubim may also be reflected in the Jewish liturgy. For example, the Kedushah, a Jewish prayer that imitates the angelic chorus praising God, mentions seraphim and ophanim, but not cherubim.

The Haftarah (prophetic reading) for the second day of Sukkot