Reprinted with permission from the JTA.

She was, like most ordinary mortals, a mass of contradictions.
Betty Friedan (1921-2006) was loud and sometimes imperious, yet she could be charming, funny, gentle, kind and winsome. A public persona, at times her ego needed massaging, but she remained surprisingly unassuming and unpretentious.

Though she exuded self-confidence, her vulnerabilities were right out there for all to see. She could fix her eyes and set her jaw in a “take no prisoners” position, but she could also listen to opposite views, change her mind, and soften at the distress of others.

She was universal woman and particular Jew. The word Jewish does not appear at all in The Feminine Mystique, her seminal work, yet every heartbeat was a Jewish one. Once, in her 50s, after fame, fortune and independence had filled her life, she asked one favor of friends–to find her a nice Jewish husband.

She wrote about drudgery and mindlessness of family work, yet her family was the sustained love of her life. She was totally invested in her children and longed for grandchildren well before they came.

Yet this complicated, complex woman changed all of our lives, even those who never read The Feminine Mystique or never heard of NOW, the National Organization for Women.

She spawned the most profound social revolution of the last few centuries without a drop of blood being shed. She will go down in history as one of the great change agents of modern history; and for us, she will be a continuing source of Jewish pride, characterized in our own history books as one of the contributions we made to the world.

How and why was her impact so great? How was it that she changed my own life–for I came from a very different place in the 1960s, from a community that offered women great satisfaction and sense of value in their roles as wives and mothers?

Her book seemed to be anti-family, anti-men. Though her chapter “Housewifery Expands to Fill the Time Available” carried some truths, mostly she managed to put down so many of the great women I knew, full-time homemakers and mothers. Moreover, as the women’s movement got off the ground in the 60s, building on her book’s steam, it quickly became more radicalized. The rhetoric of family as locus of abuse and man as exploiter grew more shrill. I’d have none of that!

Yet along with the excesses of early feminism was the underlying idea Betty Friedan offered the world: gender equality. This meant much more than the women’s vote. It meant equal access, equal talent and brains, equal dignity of women–and all of it a matter of justice.

She did not adequately answer for me the question of equal careers and who would make lunch for hungry toddlers, prepare for Shabbat dinner with guests, or meet the school bus each afternoon. She could not, because someone had to do the drudge work that accompanied the peaks and joys of raising children and running a Jewish household, and society was not yet organized to split these roles. But once she implanted in our minds and hearts the idea of equality of genders, once she posited this as ethics rather than as a battle between the sexes, each of us would work out the details in our own lives.

More than that. She opened the door to broader application of the idea of equal access and dignity to other spheres of life. In 1963, I made no connection between feminism and Jewish religious life, the imbalances in traditional Judaism created by gendered religious roles, the prevailing limitations on women studying Talmud or even the real disabilities in Jewish divorce.

But others did. These were a handful of Jewish women of the 60s, women of Ezrat Nashim, women of other denominations who were writing about or modeling the new values, women who mediated secular feminism into Jewish feminism. Once these pioneering Jewish feminists established the connections, I could apply them to my own community–not out of a sense of abuse for still I felt none, but out of a sense of ethics, of meeting the original biblical paradigm–male and female created as equals in the image of God.

Betty taught us several other important lessons. Not content to rest with the mighty power of her pen, she understood the covenantal nature of organizational life: for a job to be done and the work to continue, one needed more than an idea, more than cohorts. One needed organizational structures that would allow others to find an address and to take up the work. Betty went on to found or co-found NOW, the National Women’s Political Caucus and the First Women’s Bank and Trust Company. She co-organized the first protest march, the Women’s Strike for Equality in 1970. In 1969, though already beleaguered by opposition to feminism, she was unafraid to publicly take on the abortion issue, founding NARAL, the National Abortion and Reproductive Rights Action League.

These organizational models and her writings spawned hundreds of others. A spate of books and periodicals followed hers, and many hundreds of independent feminist organizations were created on these shores and far distant ones. Thus, her work in the world was multiplied in the arenas of politics, domestic life, religion, economics, education and all of the professions. It was, I believe, more than some of her sisters in the movement would acknowledge in later years.

Betty never denied her Jewishness. In fact she wore it proudly. In 1975, Rabbi Isaac Trainin and I invited her to join a New York Federation task force, then called Jewish Women in a Changing Society. She joined in an instant, as if waiting for the Jewish community to invite her in.

At her first meeting, she spoke of how Jewish values of justice had influenced her feminism, indeed her entire outlook on life. Later, we would learn that being a smart, Jewish girl growing up in Peoria, Illinois, shaped her sensitivities as an outsider and sharpened her abilities to engage in confrontation, both of which helped her in the early feminist battles.

She was concerned about the Jewish family. Once, in the early eighties, as she and Susan Weidman Schneider and I shared a panel in Chicago on “Feminism and the Jewish Family,” I quipped that I was a slow learner for I had read The Feminine Mystique in 1963 while pregnant with my second child but went on to have three more children. (In the book, she caricatures the woman with a vision of five children). Friends though we were by then, she took considerable umbrage at my comment for she disliked being associated with a decline in the Jewish birth rate.

She saw Jewish feminism as a logical extension of secular feminism–access, education, the need for “outside” or public roles as well as inside ones; freedom to control one’s destiny in marriage and divorce.

In those years, the task force held conferences on the agunot, women unable to obtain a Jewish divorce, on infertility, on the Jewish family. Though peripherally involved in those conferences, she remained curious and interested in their outcomes.

Betty’s greatness also lay in her ability to rethink matters. In publishing The Second Stage, she recognized that she had gone too far in The Feminine Mystique in denigrating women’s roles in the home. She wrote of transcending the false polarization between feminism and family, between men and women. She addressed the realities and satisfactions of work of the home and the satisfactions of women who chose those as their primary roles. She was criticized by some of her more radical counterparts for selling out the original vision, but then, as earlier, she held her ground.

She once acknowledged that some of her writing in “The Second Stage” was influenced by her encounter with Jewish women of the federation world who successfully put together family and service and who successfully made sequential choices in their lives regarding family and career.

Jewish history is full of flawed models, sometimes more powerful because of their flaws, and certainly more accessible. Betty was straight as an arrow, totally transparent, nothing behind a veil. What you saw was what you got, including anger or bruised ego. But that made the love, the caring, the creative mind, the generous spirit, the passion for justice all the more precious. It was a privilege for me not only to have personally known this extraordinary woman, but to be among the billions of men and women, now and in the future, whose worlds she would alter. May her memory be for a blessing.

A Young Woman’s Passion for Feminism

Her name can be found in most American history books, and her accomplishments are part of every U.S. history curriculum. ... 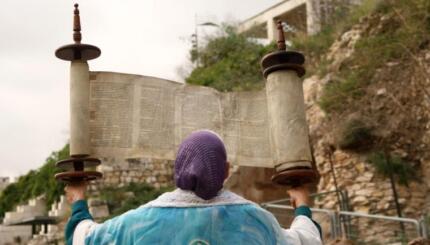 Questions for an Unfinished Revolution