Question: The last time I was in Israel I went to the Western Wall and there were all these old women selling red string bracelets like the ones Madonna used to wear. What are they, what do they do, and should I get one?

Answer: Congratulations on surviving the experience of being harassed by scary women in babushkas, Rachel — it’s part and parcel of visiting the Holy Land these days.

The red string bracelets these women are hawking are part of a whole genre of folk traditions having to do with ayin hara, or the evil eye.

Some people believe that tying one of these red strings around your left wrist will ward off bad luck. Others believe that a single woman should wear the string until it falls off naturally, at which point she will meet the person she will end up marrying. Still others connect the string to increased fertility, or to protection from bloodshed in war.

The source of the practice is somewhat murky. The Hasidic rabbi known as the Be’er Moshe (1890-1971), or the Debreczyner Rav, wrote that as a child he saw pious people wearing red strings, but he was never able to find any written sources that explain why they would do so.

Some scholars see a reference to the practice in the Tosefta (Shabbat 7). Among a list of superstitious practices is an ambiguous mention of the custom of either tying a red string or tying a string around something red. This chapter in the Tosefta deals with practices that are prohibited because they are darkhei Emori, which literally means “the practices of the Emorites” (an ancient people), but more broadly refers to customs associated with this idolatrous nation.

When it comes to the string-tying practice one rabbi asserts that it is among the prohibited darkhei Emori, while another rabbi says it is not.

In fact, it’s likely that the red string is not unique to Jewish folk life. In an essay called “The Red String: The Cultural History of a Jewish Folk Symbol,” Elly Teman writes that the practice of wearing a red string “has been widely documented in the historical and ethnographical records of many cultures.” She cites similar traditions in countries ranging from China to Greece to Romania to the Dominican Republic. In nearly every culture where the red string is found, it is claimed to protect against the evil eye and bad luck.

Today, many of the people trying to sell red thread bracelets to Jews claim that they have first wrapped the thread seven times around Rachel’s Tomb, in Bethlehem. These red strings are said to carry or encourage some of the characteristics of the biblical Rachel who was known for being generous, beautiful, and compassionate.

In Israel today, red string bracelets can be seen among all sectors of society, from the very religious to the completely secular. No longer limited only to bracelets, some men carry red strings in their wallets, and women who are pregnant, or trying to get pregnant, sometimes wear red strings around their waists. The trend went international, with red strings being worn by everyone from celebrities who bought them from the Kabbalah Centre, to pre-teens who picked them up at Target. (Red string bracelets are also easy to purchase online.)

It’s clear that wearing a red string bracelet to ward off evil is not a practice deeply rooted in Jewish text and tradition, but it seems to have struck a chord in contemporary spiritual circles and is apparently meaningful to many people. While some traditional authorities frown upon the practice, if it’s the kind of thing that speaks to you, go for it. Just remember that, mystical jewelry aside, the best way to keep people from shooting you the evil eye is probably to be a nice person. 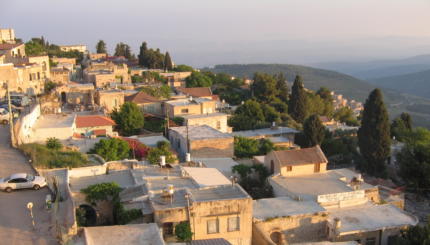 How much do you know about this area of Jewish contemplation and spirituality?