Ask the Expert: What Counts as Maror?

Question: I am a Reform Jew invited to attend an Orthodox Seder. What differences in beliefs and practices am I likely to encounter?
–Eve, Wellesley

I can give you some ideas about how different things will be, but the truth is no seder is exactly like another, and there is diversity within Orthodoxy, so it’s hard to anticipate what kind of experience you’ll be walking into. One way to prepare is to ask your host what haggadah they’ll be using, and try to look it over beforehand. This can give you a nice way of feeling out what kinds of things you’ll be talking about, and what texts will be at the center of the discussion.

I asked Rabbi Asher Lopatin what advice he would give to someone coming to an Orthodox seder for the first time, and he had this to say: “Main thing: don’t come too hungry! Don’t expect to eat for at least an hour–possibly two!”

This is a great point. One thing that is typical of Orthodox seders is their length. It’s not uncommon for seders to last well past midnight, and while this isn’t a guarantee, it’s worth it to be prepared for a long night. But, says Rabbi Lopatin, “don’t be disappointed if they just race through the haggadah and don’t have much discussion. Orthodox seders vary widely.” As with anything, some families and groups get much more gung-ho about the ritual conversation than others.

Rabbi Lopatin had some more advice: “Don’t be nervous: they will have a haggadah for you, and almost certainly it will have English as well and if everyone takes a turn reading, they won’t mind if you take your turn in English. Just come ready for fun and remember that families are families–Reform or Orthodox–with all their joys and warts.”

Now that Rabbi Lopatin has eased some of your anxiety, let me give you a couple more tips on the practical differences you’re likely to encounter.

You may be surprised at how late the seder is called for. Because Jewish days and holidays begin at sundown, a traditional seder cannot officially begin until sundown, which, in some parts of the world, makes for a pretty late start time. This is another incentive to eat a little something before you arrive, because if the seder doesn’t begin until 8, you might not get your matzah ball soup until 10 or later.

During the seder, when it’s time to drink wine, or eat matzah or maror, you’re probably accustomed to taking a little sip, eating a cracker-sized piece of matzah, and helping yourself to a dab of horseradish, right?

Well, traditional Jewish law has some guidelines about how much wine one should drink, and how much matzah and maror one needs to eat–and the amounts might strike you as surprisingly hefty. Jewish law also requires that the matzah and maror be eaten within a certain timeframe, so it’s possible that at some point in the seder a hush will come over the crowd as everyone tries to eat lots of matzah and maror relatively quickly. Don’t worry–it’s not you, it’s the matzah. Most families aren’t very strict about these guidelines, but it’s possible that they’ll come up, so it’s good to be forewarned.

But really, go expecting to eat and learn and have a good time. That’s what a good seder is all about, no matter who its participants are, or what their background is. 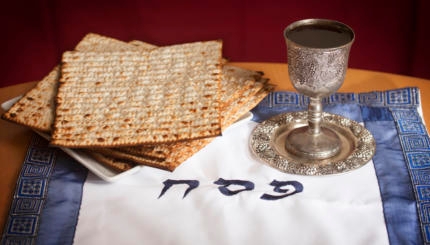 Ask the Expert: Making Everyone Happy at the Seder

How do I reduce conflict at my seder?