What Were the Nuremberg Laws?

The short answer is no — Jews are not a race. People who identify as Jewish include individuals of enormously diverse geographic origins and physical appearances, making the idea that Jews could easily be designated a race in the sense of shared physical or biological characteristics implausible.

The idea of race — whether applied to Jews or another group — is itself a problem. Generally used today to denote categories of people based on certain shared characteristics, typically physical appearance, this method of categorization was once prevalent in the scientific community. But many scientists now believe that differentiating human populations on the basis of shared physical traits is obsolete and that racial categories are primarily social constructs with little correlation to anything scientists can measure.

Even if that were not the case, on the basis of the definition above, Jews would not qualify as a race. Though many modern Jews may trace their genetics to a particular ancient Jewish community, and some common genetic features are still detectable among diverse Jewish populations, centuries of dispersion among other racial and ethic groups have broadened the Jewish gene pool to an extent that it’s impossible to identify a common set of genetic markers that biologically distinguish Jews from others. Even as far back as biblical times, Jews have possessed, and passed on, genetic markers that came from outside the community.

Moreover, Jews have no shared physical characteristics. This is readily apparent from even a cursory survey of the modern Jewish community. Jews who trace their recent ancestry to particular places around the world look more like the peoples of those lands than they do Jews whose families came from elsewhere. Ashkenazi Jews from northern Europe, for example, look more like northern Europeans than Jews from Iran. And while Ashkenazi Jews may look white, and some think of themselves as white, the Nazis did not agree — and they weren’t alone.

Finally, there’s the issue of conversion. Since biblical times, non-Jews have elected to join the Jewish community and they and their descendants have generally been viewed as no different from born Jews. There’s no mechanism to opt in to being caucasian.

The Antisemitic Assumption that Jews Are a Race

Early forms of anti-Jewish animus tended to root themselves in opposition to Jews as a religion, seeing Jews as killers of Christ and deniers of the Christian claim to be God’s new chosen people. The liberation of Jerusalem during the Crusades and the forced conversions of the Inquisition were driven by this kind of thinking. Jews who accepted Christ and stopped practicing Judaism could be spared the sword.

But in modern times, antisemites have more commonly viewed Jews as a distinct (and inferior) race, a designation from which there is no escape by conversion. Most nefariously, this idea was used by Hitler to justify the extermination of millions of Jews during the Holocaust, deeming them racially inferior to pure Aryan stock. Modern antisemitism continues to root itself in the claim that Jews are racially distinct.

How Jews Classify Themselves

Jews disagree about many things, and how to designate the Jews as a whole is one of them.

Are Jews united by a shared religion? Yes, the Jewish community shares certain religious inclinations, including belief in one God, shared holidays (like Shabbat, Passover and Yom Kippur), and upholding the Hebrew Bible and the Talmud as central religious texts. But in practice, many Jews are secular, atheist and/or non-practicing and yet still identify as Jews and are accepted by the community as Jewish.

Are Jews a culture? Yes, broadly speaking, except that Jews whose families hail from Europe, the Middle East, Africa, India, the Iberian peninsula and elsewhere often share little in the way of traditional foods, music, language and more.

Are Jews a nation? Yes, except that it has been several millennia since all Jews lived in a single country, if indeed they ever did. Even today, when there is a Jewish state, most Jews do not live there and many identify primarily with the nation in which they live.

Some Jews prefer to use terms like “people” or “tribe” —  terms that encompass more of the diversity noted above, but also have less precise definitions. Such terms are generally more inclusive of the diversity inherent in the Jewish community, allowing for the possibility that one can become Jewish by either birth or conversion, that one can stop practicing Jewish religious rituals or disavow Jewish beliefs and still identify as Jewish, and that one can identify primarily as Indian or American and still be recognized as Jewish.

In Hebrew, the Jews refer to themselves as Am Yisrael, a term that is itself ambiguous. It can mean either “nation of Israel” or “people of Israel.” 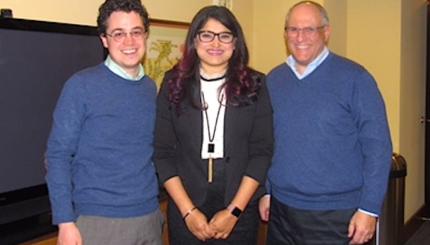 Jews and Muslims Coming Together in Minnesota

The final process of converting to Judaism is to meet with the beit din (a rabbinic “court” of three learned Jews, ...