Two main social structures competed in ancient Israel.  The people were united under the monarchy, which organized the state for administrative and taxation purposes. At the same time, the Israelites held fast to their tribal associations.  Such tribal loyalties often came into conflict with the interests of the state.

The early years of the monarchy (11th century BCE), for example, were plagued by a constant struggle between Benjamin, the tribe of Saul (Israel’s first king), and Judah, the tribe of David.  The tensions between tribe and state were among the main factors in the division of the monarchy into two separate states after the death of Solomon (928 BCE).

Within the tribal structure, the family served as the core of Israelite life.  It defined the way each individual fit into society.  These kinship relationships could be biological or forged.  For example, land was passed down from one generation to the next, with one son–usually the firstborn–receiving an extra portion.  In the event that a male heir was lacking, the patriarch of the family had the option of adopting a son who would become the heir to the family estate.

In addition to adoption, kinship ties were also forged through marriage.  Such familial ties served as a means for Israelites to interact with one another, exchange goods, and settle or prevent conflicts.

As ancient Israel was a patriarchal society, the role of women was circumscribed.  While women’s experiences varied according to the communities and centuries in which they lived, ordinary Jewish women’s lives centered on their families. Jewish women married in their teens (the average age varies according to geography and time period, from 13 to 18) and went to live with their husband’s families.

Despite cultural and religious boundaries placed on their public appearances, Jewish women participated in commercial transactions. Extant papyri attest to women buying and selling land, livestock and engaging in loan tractions. In the rabbinic era (first through seventh centuries CD), women maintained certain rights from the previous period, such as the right to own land and the ability to bring cases to court.

The religious lives of ordinary Jewish women are difficult to reconstruct. Jewish texts from the period, written exclusively by men, offer little information about the experience of actual, historical women. Instead, the writings of the rabbis are mainly prescriptive, outlining desirable and undesirable behaviors.

Archeological evidence, however, suggests that some portion of Jewish women attended synagogue services in the Diaspora communities of late antiquity. In addition, recent scholarship points to ancient amulets used by women to induce love or protection for themselves and their families. Women shared many religious obligations with men, but were exempt from many significant time-bound commandments, for example regular play at a fixed time.

Ancient Israel was primarily an agrarian society. However, with the arrival of the Romans in 63 CE, laws were enacted that either directly or indirectly challenged Jewish agriculture and the economy. Roman administrative policies proved increasingly hostile towards farming, the primary occupation of Jews during this period.  The chaos of the period, rising prices, and devaluation of currency were especially taxing upon the farmers, forcing many to abandon their farms and emigrate to cities like Sepphoris and Tiberias.

There is little information about formal education prior to the destruction of the Second Temple (70 CE)   In the fifth century BCE, we know that Ezra read the Torah publicly, translating and explaining the applications of the text to his audience. Beginning with the rabbis of the first century, however, there were efforts to have boys as young as five and six taught in the synagogue.  Early lessons focused on the Hebrew Bible, and as the boys got older, they progressed unto Mishnah and then Talmud. If a boy was especially talented or affluent, he continued his studies with a master. Most young men left school to earn a living, but learning in general was viewed as a lifelong pursuit for men.

Rufina and Her Sisters

Jewish women in the Diaspora. 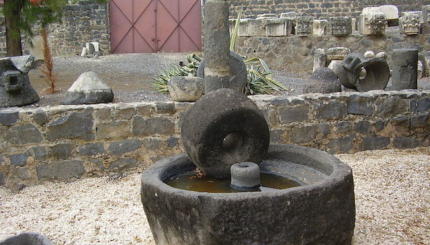