“Vanity of vanities; all is vanity!” It’s the most famous phrase in the Book of Ecclesiastes, known in Hebrew as Kohelet. Starting from the very beginning, the author laments repeatedly that everything — from labor to love to sorrow to loss — all of it is mere vanity. The word acts as refrain throughout this relatively short book — occurring no less than 38 times. Vanity is not a word most of us use regularly, and certainly not in this sense. So what exactly does it mean?

The Hebrew word so frequently translated as vanity is hevel (הבל). Before exploring exactly what this complicated word means, let’s see if we can understand why the most famous translation of the Hebrew Bible, the iconic King James version, renders it as vanity.

Even a superficial read shows that Ecclesiastes is not simply a book about eschewing overweening self-importance. It is concerned with much deeper anxieties about the purpose of life. And if we understand vanity to simply mean the kind of pride that comes from overvaluing superficial aspects of ourselves, most of the laments in Kohelet — such as this one: “I saw the wicked buried … and they were forgotten … this is also vanity” (Ecclesiastes 8:1) — make no sense.

It is better to understand vanity in its more archaic sense, as something lacking in value or hollow. Immediately, this makes much better sense of statements we find littered throughout the book, such as:

Therefore I hated life; because the work that is wrought under the sun is grievous unto me: for all is vanity and vexation of spirit.

This reads as a lament about the pointlessness of working hard to accomplish things (something for me to contemplate as I labor to compose this piece). Vanity, in this sense, means something much more like futility.

But the truth is, futility doesn’t quite capture the full sense of hevel. So let’s look at where else it is used in the Bible and what it might actually mean.

The word hevel appears 35 other times in the Hebrew Bible. In its most literal sense, it means breath or vapor. Scholars suggest it has an onomatopoeic quality, the soft consonants imitating the way a sharp breath escapes the lips with an auditory puff. (Try saying it under your breath and you’ll see what I mean.) Hevel is, in fact, one of several words the Hebrew Bible has for breath, including ruach (which also means wind and air) and neshama (breath of life, soul). But while ruach and neshama have profoundly positive connotations, referring to that which animates life and even God, hevel does not. Instead, it highlights the negative qualities of breath — namely, its insubstantiality and transience.

For instance, in several places in the Hebrew Bible, idols — false gods — are described as  hevel (for example, Deuteronomy 32:21). This is because they have no lasting power, no real substance. Isaiah probably plays on several meanings of the word — wind and insubstantiality and impotence — when he says of idols:

They shall all be borne off by the wind (ruach),

Snatched away by a breeze (hevel).

In Proverbs 31:30 we learn that a woman’s beauty is hevel (fleeting); Kohelet tells us the same thing about youth (Ecclesiastes 11:10). While hevel certainly has a negative connotation, the emphasis here seems to be not that beauty and youth are worthless, but that they are temporary.

So hevel has a rich tapestry of meanings, ranging from breath to insubstantiality to impermanence to futility and even absurdity — all of which are important to understanding Kohelet. But perhaps the most intriguing point of comparison is Genesis 4, the story of Adam and Eve’s children, the first brothers in human history. In that brief and violent story, the younger brother, murdered by his jealous older brother Cain, is named Hevel (in English: Abel). Hevel/Abel’s existence in life and in the text (just seven short verses) is heartbreakingly short, summarily snuffed out by Cain’s rage. According to Genesis, he is in fact the very first person in the world to die. In some ways, even more than Adam and Eve, whose disobedience got them thrown out of an eternal existence amid the delights of Eden, he represents human mortality. His name, which gestures to the fact that he lived, but not for long, is a reminder of his fragility and brevity.

Abel is so lacking in personality and so short on life experience he is easy to forget. As a character at least, there is little to remember about him except that he came to a tragic end. As Kohelet so poignantly reminds us over and over, we are all Abel, we are all hevel, we are all temporary. And with enough distance in the rear view mirror, few of us will leave more than a wisp of an impression. Likewise with everything that we strive to create. It is all imbued with breath, but only for a time. 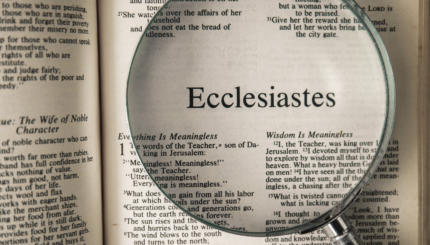 Ecclesiastes and the Quest for Truth

Approaching this enigmatic work as a statement of philosophy -- rather than an account of one man's search -- has confounded commentators across the centuries.