How often do you talk to the stranger next to you on a flight? These days, it’s easy to pop in headphones and ignore the folks around us. But I’ve learned you can miss out on great conversations if you do that. Moreover, I’ve learned that openly sharing the field I currently work in – Jewish education – can lead to some truly moving moments.

That’s why I usually make an effort to engage in conversation with the person seated next to me. Whether I ask my neighbor where they are headed, comment on something silly during the boarding process, or respond to a question of theirs, I find a simple way to initially connect. What ensues certainly varies, with some short-winded responses or brief exchanges. However, I also engage in meaningful conversations, meet fascinating people, and share many small world moments!

As an Education Fellow at the Goldring/Woldenberg Institute of Southern Jewish Life (ISJL), I travel a lot. I am off visiting communities about a third of the weekends of the year. Given that the majority of my communities are hundreds of miles away from my home in Jackson, Mississippi, I’m often traveling by plane. Recent trips have included El Paso, Texas; Lubbock, Texas; and Norfolk, Virginia, just to name a few. On the flights and on the layovers, there are opportunities to connect… and here are some of the conversations I’ve had of late.

Flying from Dallas to Lubbock, I had a window seat with no one sitting in the middle initially. Once I sat down, I called up my aunt to talk about my visit plans for the weekend at Congregation Shaareth Israel. As soon as I hung up, the woman seated beside me asked why I was going to Lubbock. I explained that I would be working in the Jewish community for the weekend. She was from Lubbock– and had no idea that her own west Texas town has a Jewish community. She mentioned going to school in Ohio, and being a supportive ally for the Jewish community of her college. I asked which college. “You might not have heard of it,” she said. “It was Kenyon College.” My eyes lit up! My cousin is currently attending Kenyon! The woman also mentioned being on the Kenyon tennis team, and as an avid tennis player myself, I was very excited to hear that. The conversation continued throughout the flight, and it was wonderful to both expand each other’s understanding and share some truly small-world moments.

On another flight from Jackson to Houston, I also had a window seat. Sitting in a two-seat row, a woman sat down in the aisle next to me. I found out that her family was originally from Austin, but her husband recently got transferred to Jackson. Her family has been living in Jackson for two years now, and she’s an ESL (English as a Second Language) teacher at a public high school in Rankin County, MIssissippi. It just so happens that my dad is an ESL teacher at a public high school in Virginia! What a small world. She asked what I am doing in Jackson, so I briefly explained the job. She also questioned what I would like to do after, so I explained my interests in urban planning. Turns out, her husband received his bachelor’s degree in regional and urban planning! She was very supportive of the field and gave me some hope to pursue this career moving forward.

Flying from Houston to Norfolk, I had – yes, you guessed it – a window seat. Moreover, I sat next to – you betcha – another woman. Though the flight was to Norfolk, she mentioned that she studies at the University of Texas – El Paso (UTEP). Having just visited El Paso, and working with the community there, I could not believe the coincidence of sitting next to a student in El Paso! Like my new friend from Lubbock, she too was surprised to find out that there was a local Jewish community in her own city of El Paso. She was even more surprised to find out that there’s more than one synagogue! I learned about her life as a student in El Paso, and her diversity of experiences in this city on the Mexican border.

Particularly in this day and age, conversations that touch on our identity can feel risky. But often a small conversational risk can lead to a huge reward – being candid about my work as a Jewish professional has led to wonderful connections across the South. Here’s to the traveling-talks that lead to open hearts!

I’m what you would call a reluctant business traveler. While I am the director of the Education Department of the ...

A Survivor on the Flight

My husband and I recently journeyed from New Orleans to Israel—a first trip for him, an always-sacred return for me. ... 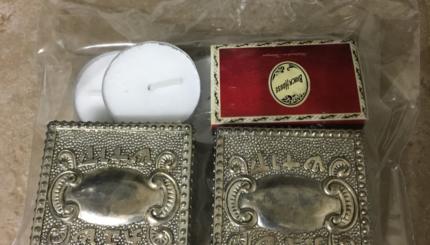 How The City of New Orleans Carried Us Through The Sabbath