A Birthday and An Anniversary: A Book and Its Inspiration

During Sukkot we open our temporary homes symbolically and recall our ancestors: Abraham, who left his home for the land God promised to show him; Isaac, who struggled to find his own way; Jacob, who fled from his brother; Joseph, who was enslaved and taken to Egypt from where Moses fled with the Israelites; Moses’s brother Aaron, who wandered through the desert; and David, who had to hide from Saul. Most of these Biblical patriarchs, the Jewish people’s founding fathers, were like my own family uprooted and/or found themselves refugees at some point in history.

The tradition of welcoming ushpizin (Aramaic for “guests”) is, therefore, something close to my heart. When asked who I would invite as my special ushpizin, I decided on my paternal grandparents, Yehudah/Adolfo and Lucy.

I never met them, since they died before I was born. To me they are strangers, even if I carry on their legacy. My grandfather’s family name derived from a Medieval German word that roughly translates to “stranger.” When he came to Colombia it was changed from Wolloch to Voloj, according to the Spanish pronunciation.

My grandfather grew up in the Bucovina area, a multicultural corner of Central Europe that changed borders and identity with every new conflict—and there were many. In the early 1930s he went to Latin America with hope for a better life. He met and fell in love with my grandmother. They married, built a Jewish home, and had five children. My father was the youngest of them. During the Shoah, the world my grandfather left behind vanished; nearly every friend and relative there was murdered. His little family in Colombia became a remnant of a long chain of tradition.

They lived together happily for nearly 40 years. When my grandmother died, it was also the end of the home he had built in the new world. He followed her six months later. It is probably true that he died of a broken heart. It was the loss of his beloved, but also the anger that followed her passing, that killed him. My grandmother was indigena, an indigenous/Native American who had converted to Judaism. And after decades of living as Jews and raising a Jewish family, the grieving family was asked to produce her conversion papers to allow her burial in the Jewish cemetery of Bogota. They were not able to locate the papers in due time, and she was buried in a non-sectarian cemetery. In death, she was separated from my grandfather, who had an arranged a plot at the Jewish cemetery where he was buried half a year later.

This experience with the cemetery stands in contrast to the very idea of ushpizin, welcoming guests into our homes. Most of the family members broke with their Jewish roots after this experience. My father was barely 21 when he lost both his parents, but he maintained his love for Judaism and created his own Jewish family. As my father’s firstborn, I was given my paternal grandfather’s Hebrew name, Yehudah. And when I married and our first son was born, the first great-grandchild, he was named in honor of both my paternal grandmother and my maternal grandfather.

Living in New York, my children now grow up in a different world, where having multiple identities is celebrated, a world I would love my ushpizin to see. Having never met my paternal grandparents, I’d love to learn from them about their realities to better understand where I come from. I would also love for them to see the multicultural legacy of our realities and to see where we are going to. L’dor v’dor—from generation to generation. 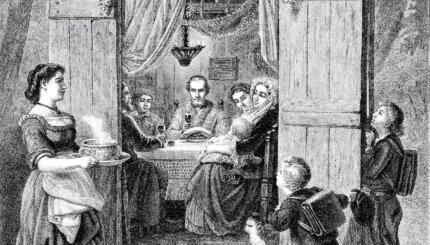 Ushpizin: Inviting in Our Ancestors on Sukkot

The custom of inviting our ancestors to join us in the sukkah has its roots in Jewish mysticism.