It’s Friday night and I’m standing in the glass vestibule at Congregation Shaare Emeth. A locked set of doors is in front of me, another set of doors leading to the lobby are behind me. I hold a walkie talkie. I am the first line of defense, but more importantly, the first offer of hospitality to synagogue service attendees.

How did I get here? Let’s rewind a bit.

I am the American-born daughter of a Taiwanese father and a Japanese mother. They each immigrated to the U.S. as young adults, met here, fell in love, got married, and had me and then my brother. We were not a religious family, though my father’s family loosely followed the practices of Taoism and my mother’s mother was a Buddhist. We celebrated Christmas, tree and all, much in the same way that Americans celebrate Valentine’s Day. We were told that this holiday celebrated peace on earth. I learned in my teenage years that many, if not most, Japanese people celebrate Christmas this way. I understood that God is an important concept to many people and much can be learned about how to be a good person from hearing these stories.

As a teen, I was curious about all kinds of different philosophies and religions. I had friends who were Jewish, Christian, and Muslim. I liked reading about the ways people have come up with value systems and guiding principles to come to terms with life and what it means. I spent the early part of my life living on Lawn Guyland (those who are from there will know what I’m “tawking” about), surrounded by Jewish neighbors, so I focused quite a bit of my reading on Judaism.

Around the same time, I met the cute Jewish boy who would eventually become my husband. He is a devoted atheist Jew—the values, culture, and history are at the core of his identity. In college, with a couple more Jewish friends, we held our own Seders in a cramped student apartment. My boyfriend/future husband had to get an older man to buy the red wine for us to make charoset! We borrowed four Haggadot from the library, each of us reading from a different one. The story of Exodus struck deep in my heart. To this day, it’s my favorite holiday. Sitting at our Seder that first time, it felt natural for me, like I was where I was supposed to be.

My husband and I were married by a rabbi and are committed to raising a Jewish family. Before our children were born, we observed holidays at home but were not affiliated with a synagogue. I became involved with the National Council of Jewish Women St. Louis as a volunteer and board member, so that was my main connection to the Jewish community. We decided to send our children to Shaare Emeth’s preschool, the same one my husband attended when he was a child. From that point on, we made a more concerted effort to bring Judaism into our family life and to weave it together with the traditions and customs I grew up with in my Taiwanese-Japanese home.

We observe Shabbat, though sometimes we say the motzi over a bowl of rice instead of challah. We make the shehecheyanu blessing at every child milestone and also celebrate them with the pork and shellfish delicacies I ate as a child. We make dozens of fried dumplings during Hanukkah in addition to dozens of latkes. We also went to family services at different synagogues looking for the right fit. When our children were no longer students at the preschool and had graduated to a Jewish day school, we realized how much we enjoyed the community, so we became members of the synagogue.

One of the many reasons why I felt at home at this synagogue is that I have never been made to feel like I am a token. Having built a rapport with the clergy and lay leaders at the synagogue, earlier this year I was honored to be elected to serve on the board of trustees. I have never been made to feel like I am there to fulfill some kind of politically-correct diversity quota. Sure, I sometimes register a fleeting look of surprise at my face at services or meetings by people who don’t know me. However, I have never been asked if I am Jewish, or how I became Jewish, or about my husband or my family’s religious status. My existence as a Jewish person has not once been questioned by any member of the clergy, lay leadership, or staff. This is not to say that my race and ethnicity are ignored—they are just taken as part of who I am. The clincher here is that my mixed-race Jewish children have been treated with the same respect and care.

To return to where we started, the literal explanation of what I was doing in the vestibule is that one of my responsibilities as a board member is to serve as a greeter at Shabbat services. The social and spiritual reason I am there is that I belong there. I can’t speak to the specific qualities that led to my nomination to the board, but my decision to accept the position comes partly from my belief that I have a responsibility to do what I can to demonstrate that we are a congregation that takes inclusivity seriously. We are a congregation located in predominantly white, wealthy, suburban, west St. Louis County. While being Jewish in this area is definitely an experience of being in the minority, being a Jewish person of color is like being a proverbial unicorn. Being Asian-American is not the only reason I’m on the board, but perhaps my non-white face can help signal to other Jews of Color that we welcome all kinds of Jews. Perhaps having a non-white perspective in making decisions concerning the well-being of the synagogue helps make it a more welcoming place. Perhaps my being there, saying “Shabbat shalom” to those who enter, helps strengthen our belief that we are diverse, we are beautiful, and we are a true community. 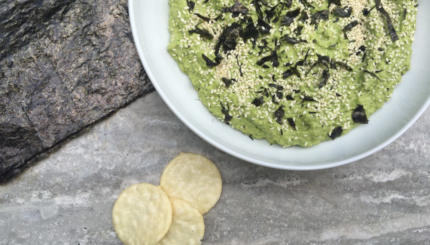 Tamari and seaweed give this Middle Eastern staple a touch of Asian flair.