My mother’s eyes were closed with fatigue. It was around 8 pm. She is so often exhausted as her body struggles with Parkinson’s and its accessory ailments.  I called to my three children, 15, 11 and 11: “Come sing Shema with Grandma.”

It is not uncommon for my mother to go to sleep before me, or even before her grandchildren. She’s always been an early-to-bed person, and we’ve always teased her about it. Perhaps that’s part and parcel of Mom being the best Kindergarten teacher anyone could ever want — she could think, create, and even sleep like a 5-year-old. But in recent years the hours have been exceedingly early, same time as my children’s bedtimes have become later.

As Mom’s Parkinson’s has progressed and her available time with her grandchildren has lessened, I jump to catch sacred moments when I can.  A meal, a conversation in the living room, Facetiming a school concert, baking instructions from her seat at the kitchen table. It’s not easy. We live halfway across the country. And when we are at Mom’s house, kids run around her house, their ultimate safe, creative place and do their thing with art, cooking, typing (yes, on my high school typewriter), singing in the basement with great acoustics. They love Grandma. And they are kids. So herding the proverbial cats to get kids around when Mom has energy and focus is no mean feat.

Bedtime Shema is a powerful piece of ritual. (1) It’s not something I grew up with, but one which I encourage as a rabbi, recognizing its impact. In fact, I began saying it with my former husband years ago. When we became parents, incorporating Shema and Hashkiveinu with Debbie Friedman and Craig Taubman’s melodies — key in the soundtrack of my youth — was vital to the bedtime ritual we created for our children, joined by songs and stories when they were younger.

These days they read on their own before bed and occasionally let me sing the rest of our NFTY & Israeli greatest bedtime hits, but it is still the rare rare night that we miss Shema. In fact, I often sing three times as three children go to bed at three different times or I want quiet moments with each of them. And while they haven’t said so, it is clear that this ritual is a given, and a calming beginning to sleep. Even the child who protests some nights as part of burgeoning preteen independence lets me sing Shema aloud most nights. It’s a gift — I can still sit on my children’s beds for a few minutes the half of the week they are in my house, and sing to or with them as their feet grow closer and closer to the end of the bed and their bodies change from those squishy infants we began singing to. Those few minutes are sacred.

Since my three were babies, their grandparents would at times join us for bedtime Shema before we put the children to bed. In recent years, we have lost so much of my mother’s exquisite grandmotherly engagement in their lives. While she’s still the loving, ever-calm presence, meeting them where they are, offering parental alternatives to direct engagement, giving baking directives, and sagely suggesting curious pursuits for the children, she’s no longer creating art projects at the teacher resource center, sending articles and cards for holidays, standing at the counter making grape jelly and baking at the counter with them. Even Scrabble has become difficult as she struggles to see. So, I take the moments when I can get them, and I corral the players.

Now my kids will come into Mom’s room, lie on the floor or bed, do gymnastics, or climb the walls in some other way, and we join together to sing.  However exhausted Mom is, and whatever she might have forgotten in her day, her lips move and she joins us in the familiar words and melody. My children kiss her goodnight with “I love you Grandma.” I draw out those moments as best I can before the kids go off to their books, showers, play and television, powerfully aware that this new tradition, putting Grandma to bed, is a painful one, but not without its sanctity.

(1) Traditionally, Shema (Deuteronomy 6.4) is said twice a day, as is instructed in Deuteronomy 6.7, “when you lie down and when you rise up.”  That practice is present in the morning and evening prayers and, additionally, remains and has developed as a bedtime ritual.  The prayers and verses that accompany the familiar words “Shema Yisrael…” include Hashkiveinu and other words asking for God’s protection throughout the night — in Hashkiveinu, “cause us to lie down in peace and to awaken us to life.”  Siddurim differ in terms of what parts of the liturgy are included in the ritual. 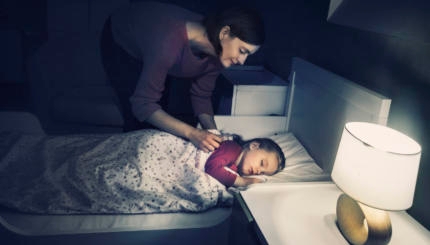 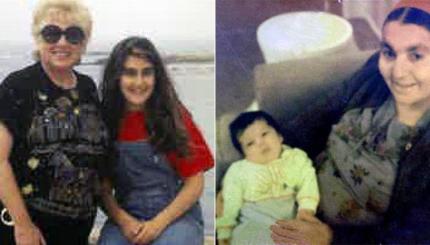 Coming Out to Grandma

I never thought of myself as the type to lie to my grandmother. She’s always been my biggest fan. When ...