Talking to a Rabbi About Gay Marriage

How to Hate the Gays

In November of 2003, the Massachusetts Supreme Court decided Goodridge v. Department of Public Health, becoming the first state to legally recognize same-sex marriages. E.M,. Ben Shaul an Orthodox Jew who lives in Massachusetts, took the ideas that the case made her think about—identity and religion and sexuality and how all of these facets of personality intersect—and decided to write a book.

That book—Flying Without a Net—was published by Interlude Press a little over a year ago. It centers on Avi (who is an observant Orthodox Jew) and Dani (who is a secular Israeli living in America). It’s the story of how they meet and fall in love, and what that love looks like in the context of a male/male relationship and an Orthodox Jewish background.

E.M. Ben Shaul is an Orthodox Jew. She isn’t a gay man. She also isn’t actually named E.M. Ben Shaul—it’s a pen name she chose to use to write about a topic she wasn’t comfortable attaching her given name to. “I’m not ashamed of the book or anything in it” Ben Shaul said “I just don’t want people picking up the book based on familiarity with my name and being confronted with something they aren’t prepared for.”

Some of the people she was worried might pick up the book because they recognized her name were her children’s friends. Her two children attend an Orthodox day school, and Ben Shaul attended one herself as a child. Though she thinks that some hearts and minds are changing in the Orthodox Jewish community, she acknowledged that change can be a slow process.

“While I am 100% confident that there were gay kids at my (Orthodox day) school, none of them were out.” Ben Shaul said. She talked about how she is still in contact with some of those classmates- a few of whom are out now, as adults. Though, she mentions, some of them who are now out no longer identify as Orthodox.

Ben Shaul saw those shades of gray within her own experiences and communities and wanted to express them in her work. Flying Without a Net does have a happy ending, but that doesn’t mean that everything is wrapped up neatly.

“When I sat down to write the end(ing) I wanted to write “everything is going to be fine” but when I started working I realized that I can’t leave out any meaning. I couldn’t add anything that would negate thousands of years of study.” Ben Shaul said. “For me as a writer I don’t think it would have been true to the characters I was trying to write. I had to be true to the text while being true to the characters. “

And the characters in the book definitely struggle. Not just—like in many romance novels—with figuring out their relationship, but with the idea of a gay relationship at all.  The character of Avi, an Orthodox Jew, spends a large portion of the book debating with himself and with Hebrew texts and interpretations having to do with sexuality. “I think people need to come to their comfort level (about sexuality) by themselves.” Ben Shaul said.  “I don’t think there should be pressure from any side.”

Avi is not the only character in the book that has questions—his religious family also had concerns about what Avi’s sexuality would mean.  His family and their questions echoed what Ben Shaul saw in the Orthodox communities that she is a part of. “There are people in my community now who have had meals and conversations with LGBT people and have found them to be different than they thought.” Ben Shaul said “There are also members of the community who will always view it as an abomination, because of translations of Leviticus.” Though his family comes to accept his relationship, their journey to do so echoes the journey that many in Orthodox communities have found themselves on.

When Ben Shaul talks about her book, she talks about how identities intersect; Gay, Jewish, Deaf (Avi works as a sign language interpreter and has deaf friends and family), old, young. “It’s what makes the wider community consider you an ‘other’ when you just feel like you” said Ben Shaul.  She finds those intersections fascinating — – and thinks that readers will too. Or, at least that they will be able to relate. “Friends of mine that have allergies, for example, find themselves in an awkward position sometimes.” She said. “They are made to feel like ‘other’, regardless of how they got to that point of otherness”

Elena Kagan, Esther, and Being Outed as Jewish or Gay

So Elena Kagan is Obama’s nominee for Supreme Court Jusice, and I, for one, am elated. I love that there ...

Earlier this week, Wayne Hoffman wrote about a funny thing and shared the meaning behind the names of a few of ... 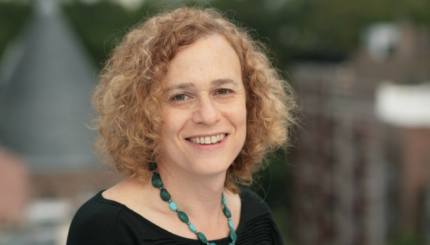 Joy’s Journey Across the Divide

A Keshet board member sets out to have respectful conversations in conservative communities.