Jaime Permuth is a documentary photographer with an eye towards capturing communities and images “on the margins of mainstream society.” Raised in Guatemala, Permuth now lives in New York and has a unique perspective on being Jewish. In this, the second of two posts, Be’chol Lashon caught up with him to talk about the familial roots of his photography.

[Read part 1 of the interview.]

Team Be’chol Lashon: How did a Jewish boy from Guatemala grow up to be a photographer?

Jaime Permuth: I come from a family of photographers, three generations to be exact. The first was my paternal grandmother, Annie Listwa. Born in Poland at the dawn of the 20th century, she emigrated to Guatemala in the early 1920s. Annie’s father had journeyed ahead of the family and when he had established himself as a businessman, he sent for his family to join him. One of the few objects my grandmother brought with her was a small Kodak box camera.

Annie probably did not consider herself a photographer, although she was both talented and dedicated to the point of compulsion. And although I myself fell in love with the medium at age 10, she never mentioned her own relationship and experience with it; neither did she offer advice or encouragement to me. I only realized she was a photographer years after her death and my own prolonged absence from Guatemala.

TBL: Tell me about your grandmother. What was her life like before she came to Guatemala and after? Were you close?

Permuth: Annie was born in Poland and raised in Switzerland. She was educated with great sophistication at a private boarding school. She was supremely well read. Her taste in art was unconventional. For instance, her favorite painter was Toulouse Lautrec. Unlike her friends, who preferred the pleasures of the water lilies cultivated by Monet or the rotund and florid coquettes of Renoir, my grandmother was charmed by Lautrec’s Parisian demimonde. She fell under the spell of his courtesans and their drunken suitors, caught in the eternal twilight of cabarets and gaudy whorehouses, which the painter himself assiduously frequented.

Annie was a very private person and difficult to know. Her life continues to be both a mystery and a source of inspiration to me.

Permuth: When I was ten years old, I picked up a small point and shoot camera for the first time. The moment I pressed the shutter down I was hooked for life. There was something powerful about placing a frame around the world; it seemed to reduce its immensity into more manageable dimensions, without sacrificing any of the wonder. That epiphany, which I would not have been able to put into words at the time, holds true even to this day.

TBL: You did not find out that your grandmother was a photographer until after she died. Tell us about that discovery and what it has meant to you.

Permuth: I left Guatemala after high school, but like any prodigal son, I had long dreamt of return. It took ten years for my self-imposed exile to run its course. When it finally did, I made my way through our old family albums. I was humbled and silenced by the wonder of their images. After a long morning spent in contemplation, I asked my father to tell me about them. His answer: Annie.

Annie Listwa. My grandmother. Why was she always silent about her own love of photography? And hadn’t anybody else opened these albums during those intervening years? Why were my fingertips so darkly stained with dust?

Among that trove of images, there was one self-portrait in particular which fascinated, and ultimately, haunted me. In it, my grandmother—barely out of her teenage years—holds her camera at waist level and smiles with impish delight at herself. Her whole body is animated by a kind of electric energy, deep shadows engulf her legs as if she is perpetually vanishing or emerging, and there is a mischief in her eyes, which I never did see in her face while she was alive. Who was this person before me, and why had we never met before?

TBL: Do you see a connection between your family’s story and the work you do as a photographer?

Permuth: I am best known for documentary style, long-term projects which explore the lives of communities who survive on the margins of mainstream society. I am attracted to their non-conformity and their strong sense of almost tribal identity.

Some of my recent projects include: Tarzán López, which focuses on the Lopez family and their circus Rey Gitano, which is the oldest traveling circus in Central America; Yonkeros, which centers on the junkyards and scrap metal businesses of Willets Point, Queens in New York; and The Street Becomes, which is a meditation on the ways the urban street is transformed in times of war and times of peace.

I believe my fascination with the nature of exile, with the pain of being an outsider, with the importance of books, writing, and interpretation and with the romance of the open road are part and parcel of my familial and Jewish heritage. But there’s more to it, of course, because Judaism is a fundamental filter for my understanding of the complexities of being alive. As such, it underlies so much of my sensibility: who I am and how I see the world. 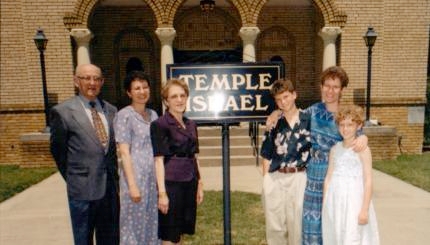 My Grandmother’s Story, The Story of a Generation

7 Charoset Recipes to Give Passover an International Flair

Global recipes for your Passover table