Remember when you were in day care? (Of course you don’t.) I was in grad school and, back then, I was still really new to this parenting thing. I was trying to figure out how to raise a small-but-mighty Black-and-Jewish feminist, a girl who was not just cute but fast, not just sweet but smart, not just pretty but strong. I was studying literature, so I peppered you with action words: run! climb! I wanted you to rush out into the world, grab it by the collar, and catch it by surprise.

One day, I came into your classroom and found all the little citizens in a tiny circle around your teacher, giggling and chattering, waiting to hear a story. Before your teacher opened the book she said, very clearly: “Okay, friends. Put on your listening ears. Listen.” One by one, every toddler in the room reached up to cup his or her hands around their ears and the room was silent—or at least as silent as it was ever going to be. Then all their faces turned up towards your teacher and the story began.

Out of all the verbs I was brainstorming, listen hadn’t occurred to me. I wanted you to sing and speak. That was exactly what I was arming you against: girls are raised to listen while other people—usually men—are talking. I wanted your voice to rise above everyone else’s. I wanted you to roar.

I’m not sure I raised a roarer, but I did raise a singer. This past erev Yom Kippur, as the first stars winked into the sky, I closed my eyes along with the congregation. Slowly, as it always does, the first sound of the Shema whispered through the hall, rising into that beautiful opening note. Your voice beside me grew until your clear, strong soprano floated above all the others. Listen.

You came to me, now grown the morning after the election, and cried. This wasn’t supposed to happen, you said. I didn’t know what to say in return. It was just like the argument we’re always having: You hand me feelings, I hand you back verbs. You say you’re sad, I say here’s what we can do about it. I wanted to give you something to do. I wanted to do something to make you feel better. All I could do was to listen to you cry, and then go somewhere to cry myself.

I’ve been so angry since then, angry for you and your brother, two children I brought into a world that I thought was going to be better than we found it but is either getting worse or miserably the same. You saw naked racism and antisemitism directed at people like you, and I told you American would not let it stand. When you felt frightened and unsafe, I let you believe that our values would win out over other values, that it was a struggle of good versus evil and, just like in all the stories you listened to us read, the heroine would prevail.

We need them to come out and explain how they squared their choice with the values we thought they had, and we also need someone ready to listen when they talk, because — as hard as this is for me to say — we need to keep this line of communication open. We can make sweeping change at the ballot box and on the Senate floor, but we can only make lasting change at the personal level. We can and should stay angry; we will fight for our rights and the rights of our fellow citizens. We will do everything we can, and one of the things we can do is to listen.

This Thanksgiving, many of our friends, who consider themselves allies, will break bread with loved ones who voted for Trump, around tables where you and I might not be welcome. Our allies need to talk to their relatives and then they themselves need to listen, openly, fully, and patiently to what comes next. Only when the tension is dissolved can the real conversation begin. If they are afraid for us and people like us, if they want to know how they can help, this is one answer.

Maia, I didn’t realize this until now — I’m still sort of new to this parenting thing, 15 years later — but listen is an action word. Listening is powerful, because listening is a choice, just like marching, and writing, and singing, and roaring. I am not ready to listen yet, but maybe you and I can learn together. 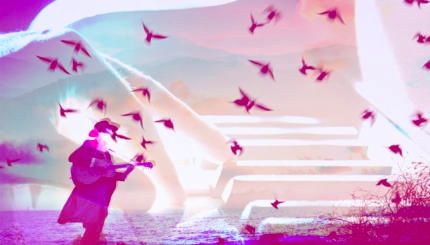 The Power of Hebrew Chant

Chanting brings the sacred phrases of Jewish tradition alive and enables them to be known in the body.