What does it mean to be Jewish and Asian? Amidst the complex conversations about race in America comes JewAsian, a groundbreaking book that explores Jewish Asian identity. What have authors and parent Helen Kiyong Kim and Noah Samuel Leavitt learned about JewAsian multicultural identity? What lessons can parents learn? What might the Jewish community do to welcome JewAsians? Team Be’chol Lashon talked to the husband/wife team to find out!

BL: What drove you to write this book?

Helen Kim: We wrote this book in large part because we were seeing couples like us where one partner who was Jewish in a cultural or/and religious sense and another partner who was racially Asian and  of a different ethnic or cultural background. We were curious if there was hard and fast statistical data so we went searching and asked lots of people who had lots of interest in social studies data about intermarriage but there was really nothing quantitative or qualitative about racial composition. Nothing on multicultural Jewish families. This was back in 1997, but everyone said you have to talk with Gary and Diane Tobin of the IJCR and Be’chol Lashon. They encouraged us to look into it.

Noah Leavitt: It was also personal. Around the same time Helen and I were beginning to talk about having kids and wanted to raise them in a way that would help them appreciate all the kinds of heritages and traditions that they were born into. There was also some desperate new parent anxiety, wondering how can we as parents be attentive and respectful to give them confidence and understanding of who they are. Our son was born was the same time when we made the commitment to do this project.

BL: What advice do you have for parents in Jewish Asian multicultural families?

Helen Kim: Based on what we studied, how to do and pass on Jewish and Judaism is a lot clearer than how to do Asian.  That  is not to say that for the couples or adult kids there is not a sense of the Asian ethnic identity. As a generalized finding, the question of how to do the Asian identity is weaker. In my own life, I find myself bumping up against that. As a second generation Korean American, I grew up with parents who wanted me to assimilate as much as possible. I’m comfortable to discuss race but my kids would not have a clear answer about what it means to be Korean. Parents in multicultural families should be open to exploring and talking about Asian identity investigating the meaning and history of Asian identity.

Noah Leavitt: Initially, I thought the kids would have difficulty holding on to the complexity, choosing which heritage takes precedence over the other. But the adult kids we interviewed did not experience challenges trying to sort out things even when there were conflict between for example Chinese and Jewish values or messaging. They just integrated it. They wanted more. Multicultural kids want access to all of it. Parents can be responsive to all of it and not worry about the contradictions. We might worry when it comes to Kosher rules and grandma’s pork buns what are we going to do about that. But parents need not worry. It does not seem to bother the kids. This was really freeing to me as a parent.

Kim: Of course it helps that the adult kids are millennials and their general modus operandi is to have options. They are comfortable with options.

BL: Do you have advice for the Jewish community when it comes to supporting JewAsian families and individuals?

Helen Kim: We hear often hear when we talk with congregations “our congregation is diverse and I doubt that there are problems with racism here.” I have a knee-jerk reaction to that: it is common to overlook problems. I would encourage communities not to say that automatically but to take a step back and question whether you really are welcoming and if everyone, especially multicultural and multiracial families, really feels included. Does everyone really feel they are included?

BL: What steps can be taken to make congregations more welcoming?

Helen Kim: Ask the multicultural families. Ask the congregants what they want and what they need.

Noah Leavitt: I would also say, beware of your assumption. In our study we found that there is energetic production of Jewishness in these households. If you see a mixed race family don’t assume they are not really doing Jewish or doing Shabbat or studying Torah. Those assumption are not borne out by our research. These households have thriving Jewish practice and sometimes even went overboard because they wanted to counter the skepticism or negative comments. If you see a household that is not familiar don’t assume they are not thriving and engaged. These households are doing a huge amount of the things that anyone who wants to see thriving Jewish life in the United States would want them to do. And we need these families in social justice, schools, camps and anything else the Jewish community is working on.

BL: You interviewed parents in households with one Asian and one Jewish partner as well as the children of such households. Were there any surprises?

Noah Leavitt: Honestly, I was surprised by how vibrant the Jewish life in these households is. Gary and Diane Tobin had suggested this might be the case but it was still a surprise. The kids in these homes are so confident in who they are. The young people push back against Jews in Jewish spaces who question their identity. They display righteous anger and courage and help educate people about being Asian and Jewish. While they often saw the questioning as annoying they felt they needed to help people understand them and do it in a respectful but Jewish way. One young man said to an elder who told him that he was not Jewish, “no you are wrong but we are all part of the same family, I don’t want to argue with you but I want you to know who I am.” That is a Jewish interaction.

Helen: That is also a very Asian interaction, respecting the elders. The idea of trying to right the wrong is more of the Jewish influence. 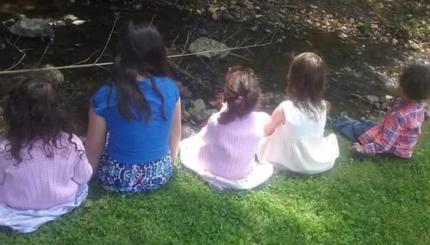 Though they did not start off life as Jews, Puah Millsaps and her multiracial family have never felt more welcome ...

Like it or not, intermarriage is a fact in Jewish life.And for the most part the Jewish community has learned ...