For some people, fitting into the status quo is soothing, comforting, peaceful. Not for me. For me, seeking a life of truth, has brought me peace. Knowing truth exists is comforting, and experiencing virtues of truth has been soothing to my soul.

Today I am a yeshiva student studying Torah full time. Before this, I was a Republican candidate for Congress. Before that, I was an entertainment executive. And before that, I was a Christian who was born in a small farm town, raised by thoughtful, hard working spiritual seekers.

My life can be broken up into chapters. Every page written through Life’s Experiences becomes more authentic, more vulnerable, more transparent, more empowered. The current chapter of my life could be titled “as the Torah takes him to a place beyond his imagination, while everyone watches.” Five months ago, I started learning at a yeshiva in Jerusalem called Ohr Somayach.  Yeshiva life is really intense, it consists of learning 10 or more hours a day. Six of those hours are spent learning Gemara and Mishnah, ancient Jewish collections of laws, wisdom and commentary. The other four hours are spent learning the five books of Moses (the Torah) and its commentaries in depth.

The biggest challenge for me so far has been language acquisition. At Ohr Somayach there’s a big focus on learning directly from the text. Only using Hebrew and ancient Aramaic, no English allowed. The rabbis speak English in the classes, but the reading is all in Hebrew/Aramaic. The goal is to give students the intellectual tools to go directly into the Torah, Gemara, Mishnah etc in the original language themselves to find answers without having to go through an intermediary or translation.. And that is the very reason why I became Jewish in the first place — to find answers about life, about God, my place in His creation, through his Torah.

Learning in yeshiva and living in Israel has probably been the most exciting series of experiences I’ve ever had in my life. The beauty of Jerusalem is unexplainable, the culture, the history, the innovation is something that can only be understood through experience.

Prior to coming to Israel, I worked pretty much my whole life as an entertainment executive partnering with companies like Warner Brothers, Sprite and Myspace; just to name a few.

In 2014, I decided to get involved in politics and became the chairman of Jewish outreach for the California Republican Assembly. In 2016, I was the Republican nominee for US Congress in the 37th District (As Shariff Hazan) Running for US Congress was challenging. Unfortunately, I lost in the Los Angeles primary by 0.9 percentage points.

Growing up my mom was a social justice professor in education at UCLA. Through her experiences I was able to see many of the challenges faced specifically in the African-American and Latino communities, even though I grew up in what would be considered the upper-middle-class suburbs.

My family was successful because I had two hard working loving parents, my father was an entrepreneur and my mother a social justice educator. I see many of these values are exemplified in Republican ideology. I would consider my parents Conservative Democrats — even though they voted for Reagan during the ’80s. I embraced the Republican value system because of the party’s belief in: family values, less dependency on government programs, smaller government — which are virtues needed in the African-American and Latino communities across America.

Running for Congress as the Republican nominee in Los Angeles was a prime opportunity to bring new ideas into communities in desperate need of social innovation. I believe in the power of human potential, and I believe that the potential can only be expressed in environments supporting individuality within a collective, entrepreneurship & strong family values. These are the very principles I was raised by.

I was born on a small farm in Springfield Ohio, close by to the university my father was attending. When I was 2, my mother’s father passed away, so my parents decided to move to Los Angeles where my mother was from and had grown up.

My path to Judaism was greatly inspired by my non-Jewish parents, both of whom dedicated their lives to seeking spiritual truths and reaching their potential as individuals. Both of my parents grew up with strong Christian background but in their early years of marriage they practice Sufism. Eventually, progressing to the teachings of Kabbalah, studying  at the Kabbalah Centre in Los Angeles.

My personal path to Orthodox Judaism started while attending the Kabbalah Centre about to 12 years ago. For me and my family, the Kabbalah Centre was an amazing place. Teaching us how to connect, personal development to the law and practices of Torah Judaism without having to convert to Judaism.

Before the Kabbalah Centre, my parents believed greatly in personal development, seeking mentorship and even therapy. For us the teachings of Kabbalah brought everything full circle, putting God, on the top of the pendulum.

After meeting with many different rabbis in Los Angeles. I found my home at Daat Torah with Rabbi Moshe Hafuta. The conversion process to Orthodox Judaism was very difficult taking close to two years to complete. The process of conversion was more than just learning about Judaism, as it was more about transforming the way I lived, the way I saw the world, the way I saw myself in the world.

What will the next chapters bring? Although dating is extremely difficult in the frum world (Orthodox world) in comparison to the non-Jewish world, I have total confidence eventually I will meet the right person, get married and start a Jewish family.

My political career is just getting started. I see myself eventually winning the congressional seat in the 37th district Los Angeles as a Republican. My long-term political aspiration is to play a major role in the decision-making of America, possibly even running for American president.
Currently my focus is continue learning in Jerusalem at Ohr Somayach. Towards the end of this year, I’m going to enter Ohr Somayach Smicha/rabbinical program where I will obtain the credentials to be an Orthodox rabbi. 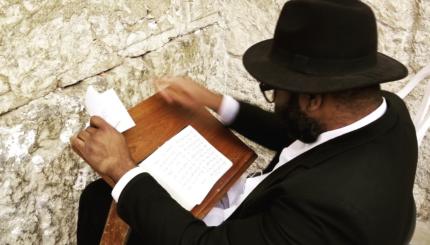