Not My Mother’s Matzah Balls: My Moroccan Kitchen

We are Sephardic Jews.  Originally from Spain, most of our families fled in 1492, expelled by the Monarchy to avoid a forced conversion to Catholicism under threat of death. Many of our families were welcomed into the lands of the Sultan, under Ottoman rule.  There our families stayed for near 500 years.

My family found refuge and a home on the Island of Rhodes, in the Mediterranean.  Rhodes is now a Greek island, from 1912-’43 an Italian protectorate, and in the time of my family, under the rule of Turkey. Our Jewish culture and traditions are influenced by our Ladino language, a form of medieval Spanish we’ve carried for hundreds of years, and the Turkish cultural of Rhodes.

At Passover, one of the staples of our seder meal is a Megina, sometimes referred to as “mina”, or a “meat quajado.” Quajado (pronounced kwah-shah-doh) is a Sephardic dish that traces back to Spain which is usually made with vegetables and eggs and often cheese. My mom’s Passover meat is made with crumbled matzah mixed in instead of cheese giving it a quajado  like consistency once cooked, and the ability to be cut easily into and served in squares. The “mina” version is often made with layers of soaked and softened matzahs and constructed more like a meat lasagna. I am sharing the recipe as my mom makes it for our family and as she has taught it in community cooking classes. This is one of those dishes you can customize to your liking, adding different spices for a different flair. Adventurous cooks could add cumin or ‘ras el hanut’ or even cilantro instead of parsley, to name a few. This version is made with ground beef, although ground turkey works as well. Let us know what you think!

Brown meat with onions in oil; transfer to bowl and allow to cool.

Add salt, pepper, parsley (or other seasoning if using) and farfel (or matzah).

Beat two of the eggs and add to mixture. Combine with meat. Repeat 2 eggs at a time until 8 eggs are mixed in and two remain.

Bake at 400 degrees for 30 minutes or until golden brown.

Cut into squares and serve. Delish!!!! 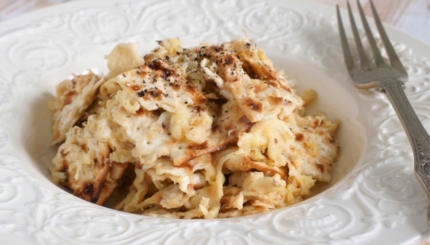 What Is Matzah Brei?

This classic Passover dish of scrambled eggs and matzah can be sweet or savory.

7 Charoset Recipes to Give Passover an International Flair

Global recipes for your Passover table

The Shavuot holiday is upon us. We celebrate our becoming a people committed to living the gift of receiving and ...