My fear is not very far below the surface. It rises when I hear about another shooting in Brooklyn, sometimes in an area I, my husband, or my daughters frequent. It rises when I think of terrorist attacks, or get news of another one. One day a couple of weeks ago I decided to take the subway into Manhattan for a little shopping on my day off. While the train was on the Manhattan Bridge, it occurred to me that no one knew where I was. I texted my plan to my husband, just in case anything happened. I didn’t think anything would, not really, but. Twenty years ago it would not have crossed my mind to do that.

A few days ago on this blog, Rabbi Matt Gewirtz wrote that we cannot allow ourselves to be paralyzed by fear, but that we must move forward with courage. I agree with him, and I’ve been thinking a lot about where we find that courage, how we generate it.

On Saturday evening I attended a rally in Brooklyn in support of Syrian refugees and against anti-Muslim hatred. There were a few hundred people there. We sang together, cheered Jewish, Muslim, and Christian speakers, and chanted the Hanukkah blessings as seven havdalah candles were lit in a large hanukkiah. The emphasis of the rally was on love—caring for the stranger, as we are commanded to do over 30 times in the Torah; and caring for the refugee, as we remember when Jews have been refugees.

READ: For Jewish groups, Syrian refugees are a reminder — not a threat

There were a few counter-protesters. They held signs that said, “Say no to Syrian refugees,” and “We want Trump.” I did not speak with them, but if they are like others who have been talking about why Syrian refugees should not be able to come to the U.S., their position has to do with fear. Because some Muslims are terrorists, all Muslims should be barred from our country, they believe. Their fear has gotten big enough to overwhelm their compassion for the many, many people who are dying because they cannot get to a safe place.

One way to find courage is to bolster and nurture our compassion. If we can recognize that our death is ultimately inevitable, and that to live in fear shrinks our lives, makes them more stressful and less happy, we begin to see that increasing our compassion can help us overcome the fear and live more expansive lives.

We can’t keep ourselves entirely safe, so I prefer to approach the world with love (as much as I can—while driving might not really count) and take a few chances, because that can lead to a richer, fuller life. And by the way, the more we meet people different than ourselves and get to know them, and find out that they’re not so different, the less need we will feel to be afraid of their group, and the better and larger our lives will become. 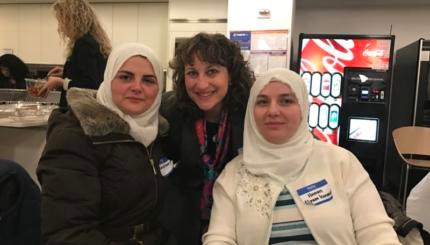 A Celebration of New Friendships

Most of us live in a bubble – the bubble of our friends, our family, our workplace and our community. ...

How Fear Brings Us Together

As a native New Yorker and a die-hard Yankees fan, the year I lived in Boston was not always an ...