The Dividing Wall of Netanyahu’s Legacy

This week’s Torah portion, Tazriah, includes the stipulation that, following the birth of a child, a mother must separate herself from the community for up to almost three months. I cannot think of this bit of our ancient law without bringing to mind the great teaching of Rabbi Phyllis Ocean-Berman who has forever transformed what might seem a troubling segregation of the post partum mother into a safeguard for the preservation of interiority at a time of recovery and nurturance.

The Levitical sequestering of a post partum woman, barring her from the cultic site, was mandated at a time when a wife’s role seems to have been to birth and raise twice as many children as would survive to early adulthood, as well as to manage  a household, property, flocks and crops. Forbidding a new mother from entering the Temple grounds suggests an understanding that there will be a lull in her active engagement in the public arena as she narrows her focus to the intimate sphere of family, her newborn the center of her attention.

The Torah denotes her as “tameh,” “unfit,” a designation also given her during menstruation and given to anyone who comes in contact with death or is suffering an affliction as extreme as leprosy. These, too, are natural times of reserve when the individual might feel unfit for the demands of social interaction and performance of public functions. Phyllis Berman says that “tumah” is a state of holy being wherein the inner divine light narrows its focus to a bright singular beam. In returning to “taharah,” holy “fit-ness,” our divine light expands to a broad glow that engages the larger world.

Reb Phyllis’s teaching heals the term tameh, taking it from “unclean” to “unfit” to differently fit – temporarily fit for one aspect of life and not another. But as I digest the violence that erupted, this week, at the remains of our Temple site, Jewish men wrestling to regain a torah passed to the women’s side of the mechitzah at the Western Wall, I have to wonder – are we ever deemed fit?

Progressive Jewish men passed the torah through a portal in the mechitzah, sustaining injury as they stood to protect the women from bombardment. Sympathetic Jewish men contributed eye-witness accounts that clearly iterate their own excited weeping in advance of the torah’s transfer to the women, and their own devastation in the face of the shoving, yelling and desecration of holy time and place that ensued. But fear of female energy in the sacred space and in contact with the sacred object persist in the Jewish world.

Approaching the Torah portion of Tazriah, this year, I continue to hear Reb Phyllis framing a woman’s unfit-ness to partake in Temple ritual in terms that normalize the female experience to includes periods of holy narrowed focus, and I also hear Anat Hoffman, leader of Women of the Wall, promoting our taharah, our fit-ness to step into the holy site, indeed, to render it all the more holy by participating in public reading of the Torah, female divine light beaming big, broad, and strong. Our Torah portion’s clarification that there are times when a woman might step back from religious life surely intimates that the norm was her presence and involvement.

My twist on Reb Phyllis’s teaching is to say that perhaps it would be best for those with a narrow perspective to temper their communal engagement. Perhaps none of us are fit to step into the holy space of community unless we enter able to appreciate the broadest spectrum of divine light as reflected in all the paths of Torah the Jewish People represent. Rabbi Yochanan, of the Talmud, taught that when God spoke Torah at Sinai, God’s voice was seven voices and the seven voices were heard in seventy languages (Shemot Rabbah 5:9) so that every man, woman and child could claim Torah as his and her own. V’chain yehi ratzon – May it be so.

Woe to Their Wives

When stories are told, we sometimes see them through the lens of the characters, sometimes from the vantage point of ...

Let’s Dance at The Kotel

The recent reports of women being dragged from the Kotel — the Western Wall — while Torah scrolls were ripped ... 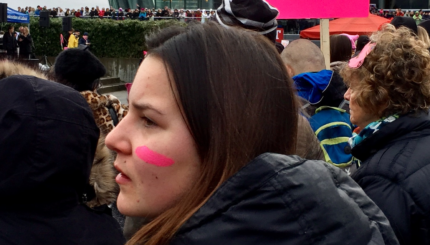