If you’ve never lived in the South, you might not be familiar with King Cakes. The brightly colored yellow-green-and-purple treats start popping up in the weeks before Mardi Gras. Though most prevalent in New Orleans, they are popular throughout the South. They’re delicious, they’re often shared at offices and parties– and yes, it’s Catholic in origin.

The name “King Cake” refers to the three kings, or three wise men. It emerged as a treat associated with pre-Lent celebrations, connected closely to Easter. Sometimes, there’s even a little plastic baby hidden somewhere in the cake – representing that same baby the wise men went to visit.

So it’s understandable that a friend recently asked me: “Um… is it weird for Jewish people to buy King Cakes?”

When asked this question, I resisted the urge to laugh it off and instead did a little reflecting (while munching on a delicious cinnamon-swirl piece of this tasty treat). Does the symbolism behind a food mean it’s proprietary to a certain group? Putting aside logistics that would obviously factor in for some observant folks, such as the laws of kashrut or halal – should foods be avoided simply because they’re associated with someone else’s tradition?

I recalled a few years ago, when a local bakery in Jackson, Mississippi, began promoting their all-new seasonal specialty: Purim baked goods. Yes! Fresh-baked, made-to-order sweet  hamentaschen in multiple flavors — and savory bourekas, too. I was beyond excited that my favorite local bakery was offering Jewish treats, and so were my Jewish friends… and so were my non-Jewish friends. We all went out and bought those Purim treats in droves. (And thank goodness – if only the small Jewish community of Jackson had shown up to buy the baked goods, that wouldn’t have been very marketable.)

But one person did ask me: “Um, is it okay for a non-Jewish person to eat those triangle Purim-cookies?”

I assured them, without hesitation, that they were welcome to a cookie.

The question is not ludicrous. Eating is sometimes related to a statement of faith, whether it’s by following rules as to what we do and do not eat, or accepting a communion wafer at a Catholic mass.

But there is a difference between foods with ritual meaning and foods with cultural symbolism. Eating hamentaschen doesn’t make you Jewish, but it does give you an opportunity to learn a delicious tidbit about Purim and the story of Esther. Sharing a King Cake with co-workers is a delicious opportunity to enjoy Mardi Gras and share in a communal celebration. It’s a sharing of cuisine that has become a low-barrier sharing of culture.

In fact, I think the story of Esther itself makes the case for sharing in the culture around us. Esther was a nice Jewish girl who managed to save her entire Jewish community, not by avoiding the culture around her– but by fully immersing in it. She married the king, held on to her identity, and stopped Haman. Let’s remember she also did this over an extended dinner party, and now we recall Haman’s defeat by eating cookies shaped like his hat and named for his ears. (Creepy.)

Lots of special-foods have stories unique to one culture or another. Learning about them is fascinating, and feasting on them is even better.

In other words, let all of us eat (king) cake. And yes, I promise, in a few more weeks… I’ll share my triangle Purim-cookies. 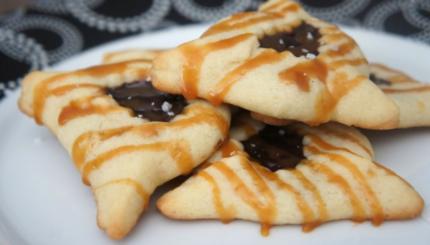 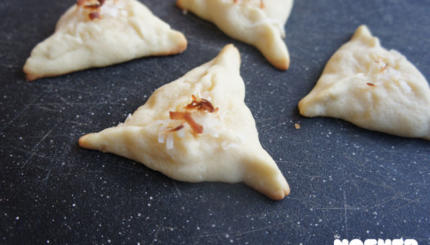 Some things don’t require a lengthy intro, and these hamantaschen are precisely that. I made them last year and was ...