While driving down Route 95 on the East Coast, one has the ability to survey hundreds of billboards along the way. They aim to tell the passerby that life without their product is a life that is incomplete. Without that specific phone, insurance plan, TV show or washing machine, one may run the risk of being an outcast, unaffiliated, and simply on the wrong train. All too often, the sole intent of the advertisement company is to draw one away from their current status of living and suggest that uniting with their agenda is the best way to succeed in the world, denying diversity, for the sake of uniformity.

In this week’s Torah portion (Genesis 11:1-9) we read about the demands of the nations to create a world of sameness and uniformity: the Tower of Babel.

“And the whole earth was of one language and of one speech… And they said one to another: ‘Come, let us build a city, and a tower, with its top in heaven, and let us make us a name; lest we be scattered abroad upon the face of the whole earth… And the LORD said: ‘Behold, they are one people, and they have all one language; and this is what they begin to do; … So the LORD scattered them abroad from thence upon the face of all the earth… Therefore was the name of it called Babel…”

Rabbi Ovadia S’forno (Italy, 16th century) comments that these nations desired to create a world of homogeny because they believed that Man’s ability to proliferate as a species (remember we weren’t that old yet) would only be possible with universalized speech and thought, hence never causing separation and differences to surface. Surely there have been times where we may strongly relate to these nations’ desire for uniformity. By nature, avoiding conflict is one of the basic tenants set out by Anna Freud in her work on defense mechanisms. Granted, placed there in order for us retain our peace of mind, but this was not the intention of our Creator. God did not want us to look the same, speak the same or act the same, and thus the call for diversity caused the tower of exclusivity to crumble.

In the words of Rabbi Samson Raphael Hirsch (Germany, 19th century), “Mankind must be scattered, must distribute itself among all the different regions of earth in order that the most divergent and contrary faculties of the human mind may find in nature the needed opportunities of development, in order that experience become full and complete…” We learn here that the Torah does not only welcome diversity, but insists on it. Though we may have been scattered to the far ends of the earth, our ability to create our own borders, languages, and theological premises, has been the gift that allowed for civilization to thrive economically, culturally, and intellectually from Noah until now.

It is our duty as Jews to not only welcome-in the other because it “feels” like the right thing to do, and more so, because God’s intentions were never to produce a world of uniformity, but strengthen us to call far and near for a world of diversity.

There is a myth of a time when everyone in the world was able to work together on the same ... 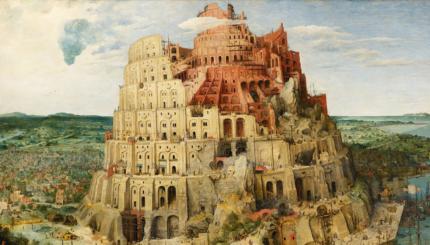 Gangsters, beggars, prostitutes and other inhabitants of Jewish Odessa.