My husband does not do birthdays. When I first met him over 20 years ago, this truly puzzled me. Birthdays were simply not a big deal and when I pressed for a reason he fell back on tradition, reminding me that Jews don’t believe in birthdays. Personally, I think his lack of birthday enthusiasm is related to his late August birthday falling on the seam between the school year blowout and the camp hoopla, and being resigned to it never being that huge celebration. But he is not so wrong. Birthdays are not a big deal in Jewish tradition.

Think about it. Given the Jewish propensity for celebration and ritual there is a notable lack of birthday celebration. Judaism pays particularly close attention to the anniversary of the day someone dies, the Yahrzeit by saying prayer, lighting candles and remembering the good done during a life. The quiet around birthdays, derives in part from the association of celebration of births as a non-Jewish practice. The only birthday mentioned in the Bible is that of Pharaoh. In the Mishnah the only celebration of birthdays comes in connection to that of pagan rulers. Rabbi Louis Jacobs explains “…in ancient times, Jews saw a birthday as a gloomy reminder that life is drawing closer to its end; a day for solemn reflection and repentance rather than festivity.” But by the time of the Talmud, there was a budding appreciation for the birthday, owing to the idea that famous rabbis birthdays overlapped with the day when another rabbi passed away so that the aggregate Torah knowledge was maintained.

Birthdays may be a less emphasized in Judaism but I’m not buying my husband’s approach. Like most Jews, I love a good birthday celebration and in fact the lack of religious ritual allows for creativity without obligation when it comes to the day!

But with the state of affairs in the Middle East, with so many lives cut short and no clear end to the violence in view, joyful abandon just does not feel like the right approach as we near his birthday.

Instead we have decided to focus on one of his passions, one that puts the power of saving lives in the hands of ordinary people, donating blood. Since he was 17, he has donated over 90 times. He is hoping that in his lifetime he will reach 180 donations. And I hope to honor David Abusch-Magder (also known as Dr. D) by encouraging others to make a donation. Wherever you live, whether you know him or not, we want to encourage you to donate. He won’t derive any direct benefit from what we are calling “a virtual blood drive,” but many others will. Can’t donate? Then encourage others to do so. The summer months are slow giving times. Those of us who are able should take an hour out of our busy lives or vacation time and take this important step.

Let us know if you donate any time in the next six weeks. We have put together a simple form to fill out. We will collect all the names and are taking suggestions on how to celebrate those who are able to give.

Jews may differ on celebrating birthdays but we can all agree on saving lives. 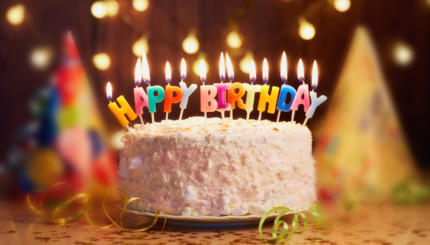 While Jewish tradition does not make a big deal of birthdays, there is no problem with celebrating them.

We all know people who at some point in their lives may be suffering or depressed and give up hope ...