We all know people who at some point in their lives may be suffering or depressed and give up hope for any change or improvement.  They experience a total sense of powerlessness in their lives and we experience it as well in our efforts to help them. Within our tradition, there is even one startling passage in the Talmud that suggests that during the Hadrianic persecutions in 135 CE, the Jewish people should have refused to have any more children and cease existing within a generation. One can only imagine the despair that must have been felt by the author of that passage.

This week’s Torah reading begins the story of Joseph and his brothers. After the brothers sell Joseph and deceive their father Jacob with a bloodied coat, Jacob falls into inconsolable mourning and refuses to be comforted for the loss of Joseph. The next chapter begins with Judah going down, leaving his brothers and family.

The Ishbitzer comments on this verse: Why did Judah go and wed a wife at this particular time? As he saw how Jacob refused to be consoled, and as he was the one who had to bring Joseph’s coat to his father, he became greatly depressed, and felt as if, God forbid, there was no more hope. So he went to marry a wife, saying, “perhaps I will have good children from whom will grow an everlasting structure.”

Then afterward, the Holy One, blessed be He, caused him to understand the following. If, God forbid, it is as you think, and there is no hope for you, and you have no life at your root, if so, then even if you give birth to a hundred, they will not have any more life than you. For with the blessed God, the channel through which He sends life must itself be of life. Then, if it is as you think, that you will only have temporary life, then it will be so also with your descendants. Therefore, when he arrived at the clarification of the matter, he fathered Shela, his name Shela meaning misled, the mistake he made in this matter. This is why his first two sons died, and Shela remained alive.

This is a profound teaching. Only those with some hope, even if only a spark, can truly nourish a hopeful future. To create a family there must be a sense of life at one’s core.

In my own work, I have had the pleasure and honor of being the rabbi at many weddings. Some have ended in divorce. This happens. But what is truly sad is couples I knew who decided to have children after they had already determined the marriage was over, deluding themselves that a child would restore the love of the couple. It does not work this way and the divorces happened anyway and for the better of the couples and their children.

Hanukah begins Saturday night. Some commentaries emphasize that the true miracle of Hanukah was not that the menorah stayed lit for eight days, but rather that the people took the initiative to light it even though they had only enough oil for one day. Hope created the miracle, or perhaps was the miracle itself. 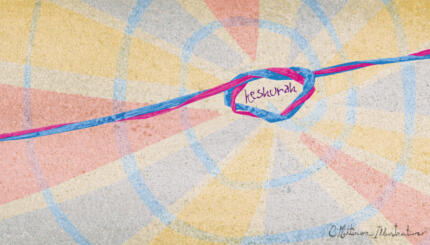