My husband and I recently journeyed from New Orleans to Israel—a first trip for him, an always-sacred return for me. On our El Al return flight, seated near us was an older gentleman. We briefly noticed him when boarding the plane; he smiled and so did we, thinking little of the encounter beyond the fleeting thought that he could be anyone’s sweet grandfather.

As everyone began to settle in, my husband noticed the numbers tattooed on the older man’s arm, and pointed them out to me.

I should mention now that on this return flight, there were also dozens of Birthright Israel kids, coming home from their trip. One of the Birthright girls was seated next to the old man, and began to ask him some questions. This man opened up to her, and told his story…and as he did we moved closer to hear it firsthand ourselves.

Encounters like this are far and few between now, as the very last of our survivors are elderly. This inspiring man was very proud that at 16 years old, he had worked hard, held on, and was lucky enough to survive Auschwitz. After the war, he lived in Israel for many years and then eventually moved to the States where he settled and raised his family. His story has been recorded by Steven Spielberg and is part of the Yad Vashem exhibit.

During our trip, we had spent a day at Yad Vashem, and I felt so deeply grateful that this place existed to tell this painful part of our history in the first person. I wondered if our next generations would be able to truly understand the sacrifices that our people made, simply for being Jewish. Men and women, like the survivor now seated just a few plane seats away from us.

During the course of that eleven hour journey, word spread that a survivor was on the flight, and my heart swelled as I watched the Birthright kids each take turns to hear this man’s story. He was patient and kind as he told it over and over again, clearly understanding his “obligation,” and I could see in their eyes as they listened attentively that this next generation clearly understood the privilege of hearing his story firsthand as much as I did. I was just as captivated by watching “our” kids as I was hearing his story.

His survival is our own. 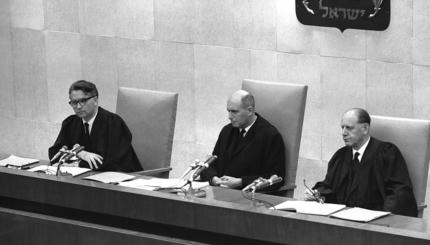 With the capture of a Nazi officer, discussion about the Holocaust entered the public realm.