Back On The Kanye Train!

So Katy Perry thinks she’s Sacha Baron Cohen, in possession of that subtle talent that turns offense into parody. Problem is, she is missing one very crucial element to her “shtick.” She’s not funny.

A video circulating on the interwebs features Ms. Perry dressed up in a variety of intentionally ridiculous getups, from an aged Las Vegas showgirl to an animal farm operator, each character ranging from odd to creepy. This is fine for abstract characters, but her depiction of a Jewish Bar Mitzvah DJ willing to do anything for money among her cast of characters raises a host of questions, not just about the diva herself, but about prejudice and power in America today.

Katy is no Sacha. She displayed all of the base offensive aspects of risky humor without any of the brilliant subtext that can make racially, ethnically and religiously oriented humor funny and, at times, poignant. In fact, Perry’s Jewish stereotype was so devoid of any redeeming quality, it makes one question whether she even understands the difference between ridiculing a rodeo clown and a Jew. Maybe she doesn’t.

This is not Katy Perry’s first foray into racial politics. She was widely lambasted for a video that many argued used offensive stereotypes about Asians. One might have expected that the backlash would have made Katy and her handlers a tad more careful. The introduction of “Yosef Shulem,” (who doesn’t do funeral’s… but will for the right price) seems to indicate otherwise.

So what’s the deal? Is Katy Perry a bigot? Does she feel similarly free to caricature other races, ethnicities and religions? Or does she feel uniquely emboldened vis-à-vis Jews and Asians? The truth is that we don’t know for sure what Perry’s personal views are, there is something else going on here.

Jews and Asians share a precarious place in American society. They are the “model minorities,” still differentiated from general American society by their racial, ethnic and cultural attributes, but simultaneously regarded as having “made it.” The politics of prejudice in America are closely tied to perceptions of power and barriers against bigotry diminish for groups that are seen as privileged. In a sense, minority success brings with it a decreasing ability for the minority group in question to dictate what is or is not offensive.

No matter Perry’s true personal views of Jews or Asians, it is very unlikely that these two groups were selected by happenstance. Katy is cultivating, like her contemporaries, a risqué reputation. Instead of wagging her tongue and twerking like Miley Cyrus, she is playing with cultural taboos. Unfortunately for her, she does not have the cultural bandwidth to intelligently, and humorously, riff off of racial and ethnic stereotypes. We do not see her bravely representing anti-Black, anti-Latino, anti-Muslim or anti-LGBTQ characters for a reason. She can’t do it in a way that would not simply be offensive. Instead we see her picking the low hanging fruit, dabbling in anti-Semitism and Orientalism without much thought about what it means, either in the context of general society, or in her shows. But given her cultural influence, such disregard has broad implications. We have every right to expect better. 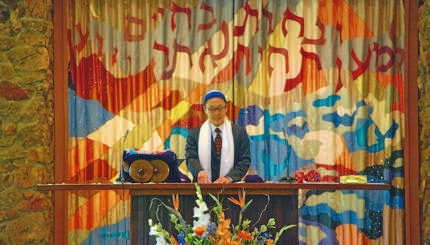 A Jewish comedian delivers bigotry with a smile.