Rabbis on the Road

It’s a Small [Jewish] World After All!

On Yom Kippur this year, the few remaining families of the 161-year old congregation of B’nai El in St. Louis, Missouri, entered the large sanctuary of Shaare Emeth. All of the members representing Shaare Emeth’s 1600-plus households simultaneously rose to their feet in honor of the Torahs held in the arms of B’nai El’s remaining few members. They, along with the Torahs, were being welcomed into their new spiritual home.

For those who may not know, B’nai El (established circa 1852) was the first Jewish congregation to build its sacred dwelling west of the Mississippi River. After a brief period of existence as an Orthodox congregation, B’nai El joined the Reform Movement, and in 1874 was among the founding congregations of the Union of American Hebrew Congregations, now known as the Union for Reform Judaism.

I say, “was,” because – as of this year – B’nai El closed its doors, due to a great decline in membership over recent decades. Facing this moment has not been easy for any of us. Yet, thanks to a dedicated board and a compassionate interim rabbi, the congregation of B’nai El made thoughtful, though difficult, decisions that brought great honor to its history, ensuring its lasting legacy.

These brave acts included offering me (as a son of the congregation) the complete contents of their Sisterhood Judaica Shop. As their Sisterhood president Maryellen McSweeny told me: “Just because we are closing doesn’t mean that we can’t still make a difference, an impact in the Jewish world. Please take these items to impact your work with small congregations in the South.”

In B’nai El’s name, I have done just that. During a Bat Mitzvah service in the Mississippi Delta, a brilliant young lady received a beautiful B’nai El
tallit
. Every time she wraps herself in it, the generations of B’nai El embrace her. During a funeral in Alabama, the mourners received a special
yahrzeit
candle holder. Every year they light it, memories of both their loved one and the congregation will be illuminated.

And, during a Shabbat service with the small college town congregation of Am Shalom in Bowling Green, Kentucky, I noticed that the Torah was without a
yad
for reading. Upon my return to the office, I went to the ISJL closet filled with B’nai El’s generous donations. From it, I pulled out a yad. I sent it to Am Shalom with the message, “May it continue to point y’all forward with God’s loving touch in this coming year.”

Am Shalom’s president, Laura Jacobs, wrote the following to Maryellen McSweeny in response:

We very much appreciate you sending us your yad. We are a very small congregation of about 15 families. We meet about one time per month for social and religious events. We are lay-led and so appreciate Rabbi Klaven and all he brings to our small congregation. As you know, he is a special person, making Judaism come alive for the young and old. We are blessed he chose to share your yad with us. Know that we will put it to good use. I’ve attached the pictures of some of our members on Yom Kippur with the yad on our Torah. L’shana tovah to you!

What I have come to appreciate even more through connecting some of the remaining items from my hometown congregation of B’nai El to other Jewish communities in need is that our story does not end when we find a place to call home. Rather, just as it was for our ancestors, coming home marks the next chapter of our development, as we continue to honor our history and live our legacy.

Image above: B’nai El’s Yad brings new blessings to its new home at Am Shalom.

Pronounced: YAHD, Origin: Hebrew, literally “hand,” this is also the pointer used in synagogue to indicate the section of the Torah or biblical text that is being read or chanted. 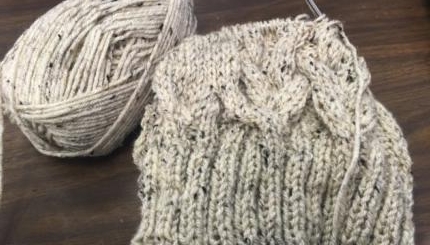 Knit One, Purl One, Connect Two

For as long as I can remember, my Nana has been making things for her six grandchildren. There were the ...

My Congregation is Amazing!

Today’s post is from Education Fellow Elaine Barenblat. As a young girl, I was very involved in my home congregation, ...