Jamming in Jerusalem with My Landlady’s Husband

I always wanted to learn to play guitar. I tried once or twice in the last decade to play, but I always gave up very quickly because it was difficult and hurt my fingers. I have a very low pain tolerance and I can’t stand being bad at things, so, despite wanting to learn to play guitar, I never stuck with it.

Then, when I was staying home during the early days of the pandemic, experiencing a lot of stress due to thesis-writing and the general state of the world, I decided to try guitar one more time. I was back home with my family, no longer on campus. We already owned a tiny, child-sized guitar because my sister had taken lessons when we were in elementary school, and in April 2020, I picked it up and tried again.

For the first week, I couldn’t play for more than about 15 minutes at a time without wanting to cry. My fingertips were red and sore even when I wasn’t playing. But I pushed through, and by week two of practicing just a little bit every day, I could play some basic chords somewhat reliably.

My poor family were all forced to listen to my slow, rhythmless, out-of-tune attempts to learn songs. I butchered every single thing I played for months. They were probably happy for me to move to Jackson, Mississippi, to work at the ISJL and take the guitar with me because it was harder for me to torture them with my playing from 1200 miles away.

In Jackson, I kept at it, learning more chords and how to switch between them without looking. I started to play songs in a way that, if not quite good, was at least recognizable. I developed calluses on my fingers that finally allowed for playing to be fun and not painful.

And finally, I started to play Jewish music.

I always used to joke that half of our traditional melodies sounded the same because they had the same chords. It turns out that for a beginning guitar player, that’s as much a blessing as it is a curse. It’s a blessing because once I learned A minor, D minor, E and F chords, I could play a lot of songs. It’s a curse because I’m still working to build the strength to play bar chords, so even after a year and a half of practicing, I’m not quite there yet.

But daily guitar practice has become an important part of my life and a sort of Jewish spiritual connection as well. The fortitude to continue playing, even when my fingers start to ache, or the chords aren’t tuning, or my strumming rhythm is out of whack, reminds me of a middah, or trait, that is a part of the Jewish spiritual practice of mussar, or discipline. This trait is to learn by repetition. Normally, this means to recite aloud the Mishnah, literally repetition, or Oral Torah. For me, it has meant switching back and forth between D major and D minor, C and F chords over and over until the transition becomes second nature.

Additionally, having finally reached a point where I can play songs well enough that I will play for people, my quarantine hobby has become a very useful skill and a way to connect to the communities that I serve. In communities with part-time clergy or without clergy, I run Shabbat services in my role as an ISJL Program Associate. I have always connected with the music of the Kabbalat Shabbat service, so to be able to play and sing and share that joy and connection has been really special for me. I hope it is just as special for my communities.

Learning to play guitar began as a way to fill my time in quarantine, but it has become a special way for me to connect with myself, Jewish music, and Jewish communities.

Singing Her Way South: A “California Hippie” Comes to Mississippi

The summer before my Bat Mitzvah, I was sitting with my family at our home in Oakland, California. I remember ... 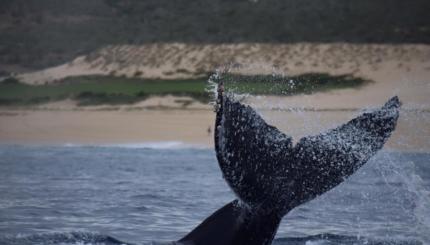 How A Whale Awakened My Spirituality

How “Hamilton” Will Help Me Teach About Jewish History

Hamilton, a new musical by Lin-Manuel Miranda, has captivated my nerdy history-and-Broadway-musical-loving-heart in a big way. That’s not surprising — ...