From the Collection: “What My Lady Should Not Wear”

From the Collection: When Life Gives You Wood, Make Ducks

The Mississippi State Sovereignty Commission was created in 1956 to fight against racial integration. An arm of Mississippi’s state government, the commission investigated the efforts of civil rights groups and activists who posed a threat to the “Mississippi way of life.” When the commission was formally disbanded in 1977, the state sealed its records for fifty years. But a lawsuit sponsored by the ACLU eventually forced the state to open the records to researchers in 1998.

The Sovereignty Commission papers offer a unique look into the state’s efforts to combat the forces of racial progress. But they also offer moments of comic relief, such as when the commission sent two of its investigators to spy on the 1960 regional B’nai B’rith Youth Organization (BBYO) convention at the Sun-N-Sand Motel in Biloxi.

A man named N.C. Wingo of Jackson had contacted officials at the Sovereignty Commission and informed them about the meeting, accusing BBYO of being a secretive radical subversive group. According to declassified documents, officials at the Sovereignty Commission had never heard of BBYO and sent two of their top investigators to spy on this convention.

The investigators’ six-page report manages to be both chilling and humorous at the same time. The manager of the Sun-N-Sand led the investigators to a spot where they could secretly eavesdrop and watch the proceedings. Anyone who has ever attended or chaperoned a Jewish youth group event can picture what the report describes: “For the first several minutes, there was so much noise that we could not distinguish anything that was being said…these youth sang songs and a general party atmosphere prevailed.” The investigators added, “we could observe nothing or hear nothing that indicated that they were advocating subversion, integration or anything of a communistic nature.” Eventually, the agents realized that the meeting was likely just “a group of Jewish kids…with no intentions of doing anything other than having a good time.” They even admitted that the kids seemed better behaved than the average group of teenagers. Nevertheless, they stayed through the entire convention to see if they could overhear anything that was “detrimental to our form of government.”

The group consisted of 300 young Jews between the ages of 14 and 18 from Alabama, Arkansas, Louisiana, and Tennessee. The investigators acquired a partial list of conference participants, and also took copies of all the pamphlets and literature that was distributed during the meeting, which they pored over for any sign of radicalism. Apparently, the bulletin of the Bluff City BBG (B’nai B’rith Girls) chapter from Memphis contained a few suspicious articles. One reported that the group had celebrated United Nations Day (a suspect organization from the perspective of the Sovereignty Commission). The bulletin also reported that the group held a program on the topic of intermarriage, though the investigators noted that this referred to religious and not racial intermarriage, and that the girls had concluded that they would not date non-Jews.

The commission agents concluded that the group offered no threat to segregation, though they did admit that for the thirty-minute minyan held each morning they were unable to observe or listen to the proceedings. As the agent reported, “I am very unfamiliar with this organization and the Jewish religion. I have no idea what this ‘Minion’ is, but I do know that they held it in small groups of approximately ten…in the private rooms of individuals at the motel.” While this daily small group meeting seemed suspicious to the agents, they could find no clear evidence of subversion during the BBYO meeting.

This Sovereignty Commission report raises several interesting issues. The first is the absurd nature of the assignment and the “keystone cops” aspect of the Sovereignty Commission. BBYO was certainly not a major player in the civil rights movement. Yet, the national organization of B’nai B’rith was on record as supporting the movement. In 1956, the president of B’nai B’rith urged all members to support desegregation as a human rights issue. And the B’nai B’rith’s Anti-Defamation League (ADL) was, and remains, an outspoken opponent of racial prejudice.

What is especially notable is that this report seems to be more the exception than the rule. I have not been able to find any other example of a Sovereignty Commission investigation of a Jewish organization, despite the fact that several Mississippi rabbis were outspoken supporters of racial equality. In fact, Mississippi Jews make relatively few appearances in the commission files. Many southern Jews feared that Jewish civil rights workers from the North would threaten the acceptance southern Jews enjoyed. But as the Sovereignty Commission files indicate, Mississippi’s white supremacist government made key distinctions between local Jews and “outside agitators.”

Except for that time they spied on BBYO. 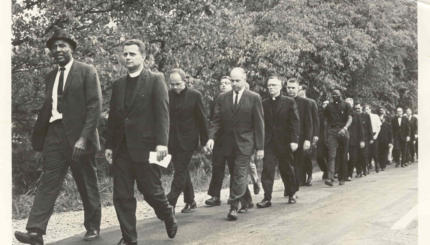 Getting to Know (Jewish) Natchez

Last week, I was on the road with TENT, a week-long traveling seminar on culture, history, and social justice for ...