Jews read sections of the Torah each week, and these sections, known as parshiyot, inspire endless examination year after year. Each week we will bring you regular essays examining these portions from a queer perspective, drawn from the book Torah Queeries: Weekly Commentaries on the Hebrew Bible and the Torah Queeries online collection. This week, Mijael Vera considers what the Torah’s careful documentation of Joseph’s unusual wardrobe might reveal.

In this week’s portion, we return once again to the story of Joseph – a story in which the connecting thread shows that whatever is normally deemed absurd comes to happen and in which literal and symbolic boundaries are repeatedly crossed. The servant (Joseph) becomes master, and the master (Pharoah) bows down to the servant. But it is in the psychological realm that boundary-crossing is most significant, for it is through a deep psychological analysis of Joseph that we come to truly understand him.

In parashat Vayigash, we come to the climax of Joseph’s story. Due to the famine in Canaan, Joseph’s brothers are forced to go to Egypt and ask for food. As we saw in last week’s portion, they curiously do not recognize Joseph, their brother, when they are brought before him.

Nobody has been able to adequately explain why he could not be recognized. Some Talmudic sages suggest that the brother’s souls still had rancor against Joseph, and thus, they were not able to recognize him. But Rashi suggests that the brothers’ decision was to search everywhere but never in the Pharaoh’s court. A more radical explanation, however, is that Joseph was not recognized because he appeared to them as a sort of transvestite.

The pharaonic custom was a form of transvestism that did not necessarily imply wearing the garments of the opposite gender, but rather garments that were exclusive to the ruling cast and that were made of very fine linen.

Transvestism was very common in Egypt, and people would cross-dress according to the political or religious necessity. For example, along with the ambivalent garment and jewelry of their position, governors would wear make-up that was the same for both genders. This make-up, according to archeological evidence, was for ritualistic and decorative uses, and consisted mainly of adornment of the eyebrows and the eyelids with permanent tattoos, which was therefore irreversible.

As we saw last week in parashat Miketz, Joseph sells his brothers the food they needed, but returns the money, hiding it in a bag of wheat. In a dramatic scene in this week’s portion, being overwhelmed by emotions, Joseph reveals his true identity to his brothers at a banquet. After the reconciliation, Jacob moved all his family to Egypt and settled them in the land of Goshen, where his descendants dwelt and multiplied until they were liberated by Moses.

Joseph can be seen as one of the most coherent and fascinating characters in the Holy Scriptures. His story is similar to that of many gays, lesbians, bisexuals and transgender individuals in that, from an early age, they, too, notice how their behavior and state of mind differs from those surrounding them. If we pay careful attention to the story, we will realize that Joseph’s dreams in parashat Vayeshev – one of the original causes of his brother’s emnity – are not at all exceptional. His two dreams seem to be some sort of rebellion provoked by his fragile and effeminate beauty that renders him inapt for the rough life of a shepherd. His brothers’ rejection, a mix of tabooistic fear and jealousy, is similar to the unconscious impulses that manifest in some forms of homophobia.

His father’s reserved attitude and the unusual multi-colored robe he gives his son tell us that Jacob, from an early age, was already aware that Joseph was very different from his brothers and from the pastoral life. It is also possible that Jacob was influenced by a religious tradition in those days that considered an effeminate man to be a sort of transition between the masculine and the feminine that would have been believed to have allowed him to have a wider and more prophetic view of reality.

Having undergone hostility and aggression from his brothers that came close to murder and culminated into his being sold as a slave, it is reasonable to assume that Joseph developed a reactive personality that led him to seek a historic revenge: to be the best, to strive for the best, an attitude that many people in the LGBTQI community adopt when confronted with an inhospitable environment.

History will favor Joseph. Byproduct of a tremendously difficult life: a childhood and youth plagued with hostility, slavery, servitude, and prison, Joseph manages to stand in the midst of so much adversity and “make it.” Within this frame, we can understand the idea of his two dreams. But Joseph ascended to power not because of his dreams, but by his ability to interpret other people’s dreams.

It would be interesting to reflect on the symbolic key that appears throughout this story of ascension: Joseph’s clothing.

There is no other character in the Torah, or in the Holy Scriptures as a whole, to whom permanent and ongoing attention is paid to a person’s clothing. Joseph’s story begins with the multi-colored robe made by his father. This garment must have been extremely eccentric, given that at that time it was very difficult to get dye for the fabric. Jacob would most likely have used basic colors in darker shades, thick fabric made of wool and tanned leather. In this austere environment, Joseph’s robe is certainly a very special item that gives us fundamental keys to the reading of his life.

Later, in his role of servant at Potiphar’s house, Joseph has a new garment. There he is assaulted by his master’s wife, who holds onto his clothing. Joseph escapes, but his clothing curiously remains in her hands. This will later be used as the evidence against Joseph in the claim that it was he who assaulted his master’s wife.

Along with the mentions of clothing, in two of the most crucial parts of the story Joseph revealed his nakedness, first in the pit where he was cast by his brothers and later in Potiphar’s house. This nakedness has an enormous psychological, semiological, and kabbalistic force. It shows a Joseph that, being a byproduct of adverse circumstances, rids himself little by little of the layers imposed by his personal history, revealing his inner self and thus getting closer to a transsexual identity which seems to fit him best.

The last garment worn by Joseph is the one that corresponded to his rank of viceroy: fine (white) linen, jewels and make-up. The transformation was now complete. From now on, there are no further descriptions of his clothes. This is the esthetic identity he presents to his father and his brothers.

Joseph revealed his identity but did not abandon his status. His brothers and his father will have to deal with the fact that the young man turned out to be the wealthiest and most successful one in the family. The revenge came to an end and the debts have now been settled. This climax was achieved when Joseph acquired total independence from the fragile and subtle insecurity he experienced within the frames of parental demands. These demands are indispensable in one’s evolution towards social inclusion and acceptance, but they also inflict a certain dissatisfaction, aggression and blame. Joseph resolved this contradiction between the reproduction of the tribal model that was offered to him and the possibility of emancipation through a new symbolic landscape. And he did so through a narcissistic withdrawal. Through his success he felt valued due to the versatile, but liberating support of “power.”

We can now safely infer that Joseph is a character that can be classified as “transitioning.” He switches from one culture to another, from one way of being a son to another, from chastity to voluptuosity, from poverty to wealth, from submission to power, from revenge to pardon, from a pastoral lifestyle to an agricultural one, from the masculine to the feminine. It is not surprising that once Joseph became a viceroy, he would cross-dress – wearing linen clothes and make-up – to the extent that he would be completely unrecognizable.

Translated from Spanish by Moshe Ben-Chacon 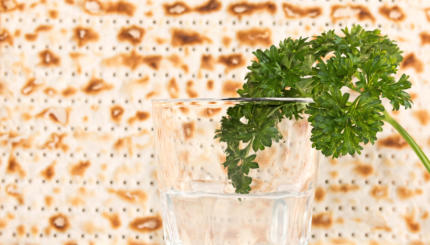 The Hidden Meaning of Karpas

The green vegetable dipped in saltwater at the seder alludes to the very beginning of the Israelites' slavery saga. 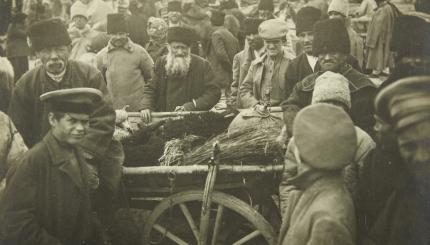