Finding a Place at the JOFA UK Conference

An Orthodox rabbinic colleague Rabbi Zev Farber recently posted on Morethodoxy a piece on the experience of place women have in Orthodox synagogues.  He concludes his post with: “Rather my aim here is the underlying message that our synagogues are sending to women. We all want to remain true to halakhah and create a synagogue environment where men and women thrive, but I fear that without addressing the underlying message of women not really being in the room, instead of creating a home for all Jews, we are creating a men’s club.”

In response to this, I posted a comment to him “While I share the sentiments here, I am wondering why Rabbi Farber has written what is essentially a thirty or forty year old dated post, including the Flintstone and Ozick references. My fifty two year old wife would vigorously nod in agreement and my age seventeen and twenty seven daughters’ eyes would glaze over and say deal with it”.  (My twenty four year old is a less frequent synagogue attendee, but the one she attends less frequently would be Orthodox.)

It is interesting where we draw our lines in the sand. My daughters would never put up with being denied equal access to Jewish text, but are more at peace with ritual inequality or difference.  They do not harbor a secret desire to put on tefillen.  As my daughter put it “Why would I? Nobody in my community does”.

I am left to wonder why this is the case. What changed between my wife’s generation and my daughters’?  I think part of the answer is that my daughters are the beneficiaries of those women and men who came before them and fought the battles, created the learning environments and opened up the doors of the Beit Midrash.  What is striking is that the ritual practices per se are not the issue.  The fact that their voices can now be heard appears to be critical.  They are not silent but engaged participants in the debates of Jewish life. If they are not bothered by not being able to read Torah, it is because their voices can still be heard in the Beit Midrash actively engaging our sacred texts.

In a different vein, but I think not unrelated, I see a liberal approach to social issues. On the one hand they are committed to Taharat Hamishpacha (family purity laws) and there was no question my daughter would cover her hair after her wedding. However my sense is that on issues confronting their gay friends, my daughters simply want their friends to be happy in whatever relationship they are in.

In acquiring a voice and becoming active learners, these young Orthodox women are at peace with their place in the synagogue.  They love the best of the Orthodox community, but they retain their moral voice.  As committed to halakhah as they are, they retain their sovereign self.

I didn’t mind the mechitza  at first. The wall—more frequently a short partition—separating men and women in ritual spaces was ... 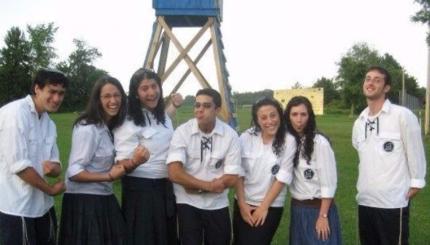 Camp as a Place for Change

I still have not gotten situated to the long Shabbats of the summer. For sixteen summers, I was immersed in ...