Do You Believe in Ghosts?

Hanukkah (the first candle is lit on the evening of Dec. 20, 2011) is the Jewish holiday which celebrates miracles. One custom at our home is that on each night of Hanukkah we light candles, say blessings, and then, before any gifts are exchanged or dreidels spun, each member of the family shares a miracle story. What is a miracle? A miracle is better defined as “an event whose cause is inexplicable by the laws of nature or science, and is therefore attributed to the Divine.”

Miracles sound different to the very young than they do to adults, and, frankly a miracle is in the eye of the beholder. They are, most often very personal, and from any other person’s perspective, could just as easily be attributed to good luck. I remember twenty years ago, during my interview for Rabbinical school, I was asked the question, “Do you believe in miracles?”

“Was the Red Sea’s parting a miracle?”

“I don’t believe I can really know which event is or isn’t a miracle,” I answered, “For me, it’s enough to know that they happen.”

I’ve come to this comfortable place about miracles. If someone has a story to share that he or she considers miraculous, I ask myself the question, “Is there any harm in me accepting this as miraculous? What if I’m wrong?” Truth is, I’m wrong about so much about ‘factual life’ that the harm in being wrong once more is not a dangerous risk. Consider the following story a former congregant shared with me about her mother who stayed home with her grandson so that mom could return to work:

Bubbe Shirley spent (‘Bubby’ is a Yiddish term of endearment for grandmother) every day with Benjamin, and they loved each other very much. It was Bubby Shirley that took little Benny to and from pre-school, who took him to the store, sang songs with him, and best of all walked along the beach picking up shells with Benny. It was terrifying to the whole family when Bubby Shirley discovered that she had stage IV breast cancer, that the tumors had metastasized, and that her lungs and liver were compromised. The clock was ticking. There was no sense in operating, but there was time for a family trip. Bubby Shirley took her daughter and grandson to Florida, where on another walk along the beach she and Benny found their biggest shell ever, a conch shell

in which one can hear the sound of the ocean or blow into it and make a deep trumpet sound.

Soon after Bubby Shirley died. Her daughter was beside herself, not just for her own loss, but her son’s.

On the first day of kindergarden Benny’s mother was in the kitchen crying, her mother should have been here for this. She pulled herself together, for Benny, and went to his room to leave. Benny sat on his made bed with his Barney backpack on, and the conche shell to his ear like a telephone.

Benny’s mother thought that maybe he was worried about taking such a big step without his grandmother. Perhaps she could find out what specifically he was worried about.
“What are you telling her,” she asked.  “I’m not saying anything. She’s talking to me.”

“What is she saying?”

“She said that she’s fine and that you will be too,” and with that he hung up the shell and was ready to go.

Is there a great risk in believing that a connection between heaven and earth was being made? My opinion is ‘no’. I prefer to suspend judgement. The troubling things in life have a way of seeming bigger than they really are, why not allow the miraculous a chance as well.

Hag Urim Sameach (Happy Holiday of Lights). May this season fill you and yours with the sense of the closeness of the miraculous.

Eternal light in the ancient Temple symbolized an uninterrupted connection between God and the people. When the Romans desecrated the ...

Hanukkah is just around the corner. The smell of the freshly cooked latkes. The dreidels spinning on a table next to ... 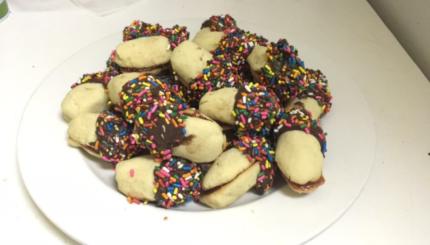 Publicizing the Miracle – During and After Hanukkah

In the New Year, and all year long…