First Fruits of the LGBT Movement

Lisa Lepson, the Executive Director of the Joshua Venture group, writes in her piece “Where Yesterday Meets Tomorrow:”

The Judaism that is evolving before our eyes isn’t really new or innovative. In fact, the whole concept of evolution is at the core of Judaism. What our social entrepreneurs are doing is making tradition relevant to us once more, fusing them with contemporary values and bestowing upon them new life. They are leading a vibrant “re-generation” of our cultural and spiritual heritage.

The holiday of Shavuot, a pillar in the Pilgrimage Festival series that also includes Passover and Sukkot, illustrates the Jewish dance between innovation and tradition, and embodies the concept of “making tradition relevant to us once more.”

The holiday has multiple names, revealing its multiple identities. Shavuot, which means “weeks,” refers to the fact that the holiday takes place seven weeks after the beginning of Passover (Deuteronomy 16:9 – 12); the Torah tells us to count from the time of the barley, or Omer, harvest, until the time of the wheat harvest, which we celebrate on Shavuot. The holiday is also called Chag HaBikkurim (Numbers 28:26), the Festival of the First Fruits. This time of year marked the ripening of Israel’s first fruits, and the Mishnah in Tractate Bikkurim describes how people from all over Israel marched to Jerusalem with their fruits in beautiful baskets to give to the priest in the Temple. Shavuot is also known as Chag HaKatzir, the Festival of the Harvest (Exodus 23: 16), since Shavuot marks the summer harvest in Israel.

Interestingly, none of these names reflects what we actually celebrate on Shavuot today. Yes, we continue to count the days from Passover to Shavuot, and refer to it as Sefirat HaOmer, the counting of the Omer, but most Jews have no idea when the barley or wheat harvest is in the land of Israel, and what, if anything, it has to do with Shavuot. What, instead, do we celebrate? Here’s where Shavuot, cloaked in an entirely new name, emerges with its new identity: Chag Matan Torateinu – the Festival of the Giving of our Torah.

We celebrate the receiving of the Torah, though nowhere in the Torah does it explicitly say that this holiday has anything to do with Torah. We speak of counting-down the days from our liberation from the bondage of Egypt to our time of true freedom, when we committed ourselves to God’s law. In synagogue, we re-enact the experience at Sinai, decorating the synagogue with greenery, and standing, as the Israelites stood, when the Ten Commandments are read. We have a custom to stay up all night engaged in Torah study, to make up for the fact that the Israelites overslept on the morning of Matan Torah. And, in all of the Shavuot liturgy, the holiday is referred to as “zman matan Torateinu,” the time of the giving of the Torah, to reinforce this identity of the holiday.

Where did this name, and this aspect of the holiday, which has completely replaced the Torah’s description of what we should be celebrating, come from? A group of social entrepreneurs, otherwise known as the Tanaim – the group of Rabbis who were forced to grapple with the challenges that emerged for the Jewish community after the destruction of the Second Temple.

Unlike the other pilgrimage festivals, Shavuot is completely land-dependent. On Sukkot, no matter where Jews reside, they can build a Sukkah and wave the four species, as dictated by the Torah. On Passover, matzah can be prepared and eaten anywhere. But the Rabbis quickly became aware that when Jews were uprooted from the land and deprived of the Temple and its rituals, Shavuot would, as Rabbi Irving Greenberg writes in his book The Jewish Way: Living the Holidays, “have withered on the vine.” They therefore, creatively, and with deep grounding in tradition, wove a new identity for this holiday, an identity which, essentially, allowed them engage in the radical act of transforming a sacred tradition. They hi-lighted the calculation that the Torah must have been given approximately seven weeks after the Exodus from Egypt, and inspired the Jewish people to re-imagine the count-down from the barley sacrifice to the wheat sacrifice as a countdown from the Exodus to the full redemption – the receiving of the Torah.

According to Jewish tradition, God gave Moses the Torah in two forms – the written form and the oral form – Torah She’Bichtav, and Torah She’b’al Peh. One, etched in stone, was revered as God’s own words, given to Israel to guide and direct them. The other, by definition malleable and in constant flux, was a system of translating, interpreting, and making those words meaningful. According to the Rabbinic tradition, the realm of the oral Torah should have stayed oral, open to reinterpretation. It was never to have been written down: “R. Aba son of R. Hiya son of Aba said in the name or R. Yochanan: Those who write halachot (laws of the oral Torah) are like those who burn the Torah, and one who learns from them receives no reward.”  (Babylonian Talmud, Temurah 14b). The Rabbis feared that if the realm of the oral crossed into the realm of the written, it would devalue both realms, cheapening the eternal sacredness of the written Torah, and etching in stone that which should have been more informal and ephemeral in nature.

And yet, necessity demanded that the oral law be written down; later on in the same excerpt from the Talmud, the Rabbis conclude that “it is better for Torah to be uprooted than for Torah to be forgotten in Israel.” Their argument is profound: it is better to change the very nature of our system, the very essence of our traditions, in order to preserve that system, and maintain those traditions.

This concept is what the Rabbis are asking us to celebrate on Shavuot. When we observe this traditional, Torah-based holiday in this radically non-traditional, oral-law based way, calling the holiday by the name the Torah has given it, and celebrating it as the Rabbis re-imagined it, we are celebrating the paradox that is our religion. We are celebrating the complex, intertwined system of the oral and written traditions, and acknowledging that, in Judaism, the very purpose of innovation is to preserve that which is traditional and sacred, which in turn actually requires that the very nature of the tradition must be flexible and malleable.

This Rabbinic tradition is being carried out by today’s Jewish social entrepreneurs. The challenge we all face as a community is to ensure that our innovations are indeed preserving our traditions, and that those cultivating innovations have the respect, depth of knowledge, and humility to engage in this sacred dance.

Maya Bernstein works as the Director of Education for UpStart Bay Area, which supports Jewish innovation in the Bay Area. She blogs regularly for Lilith Magazine and e-Jewishphilanthropy.com. 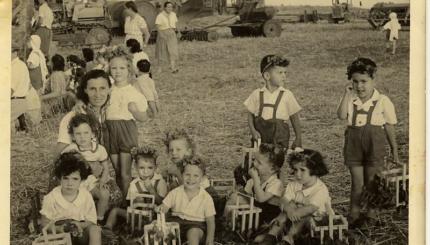 For a holiday that is only one or two days long, “weeks” seems a strange name.