A Memorial Day to Remember

Today is Yom HaZikaron, Israeli Memorial Day. If you’ve ever been to a tekes (ceremony) for Yom Hazikaron you’ve probably thought about how different it is from Memorial Day in America, which is basically about barbecues and department store sales. Yom HaZikaron is a genuinely somber and emotional time in Israel. Unfortunately, out of necesssity Israelis have gotten very good at creating ceremonies and memorials that are effective and respectful but also provide a good avenue for public grief.

But see, public grieving is such a bizarre concept to me. To me, at least, the thing that’s so gut wrenching about grief is that it’s personal. You’re rebuilding your life around this noticeable absence. Your job, as someone who is mourning, is to pay respect to the person who was a part of your life. And at least in the Jewish world, we grieve for those we know best and who are related to us. This isn’t just a loyalty thing, I don’t think. These are the people who are the most major characters in our lives. We grieve for them because we are a part of them, and when they are gone, so are whole segments of our own history.

In light of that, grieving publicly for someone we didn’t know, never even met or knew existed until after they died, it seems very odd to me. Even in Israel, where it’s done well, I think it’s more about performance of grief, and less about actually giving space for those who are experiencing grief. Now, some people really need an avenue for performance of grief, and I think that Israel, as a country, has a lot of national grief issues. Still, the whole thing feels very very strange to me. I imagine that if my father was a soldier who had been killed I would feel really angry and not comforted by a whole nation of people grieving for him. Maybe it’s just me, but it seems like forcing people to share their grief, which isn’t always attractive/helpful.

I don’t know. I’m probably off with some of this. Anyway, for more thoughts on this, check out the excellent and insightful blog post by Zach Silver, a friend who’s in Israel now. Zach talks about what it’s like to be in Israel while the country is mourning, but to not actually have any relatives or friends to mourn for on Yom HaZikaron.

The other thing I want to mention is that I think a lot of times in war memorials of all kinds we end up crossing the thin line to patriotism when we really shouldn’t. Today is about remembering Israel’s fallen soldiers, but tomorrow is about celebrating the State’s existence, and there is something very dangerous about putting the two so close together.

The title of this blog post references a famous anti-war poem by Wilfred Owen, a soldier who died in WWI. In the poem he describes one of his comrades dying from mustard gas, and then writes:

If in some smothering dreams you too could pace
Behind the wagon that we flung him in,
And watch the white eyes writhing in his face,
His hanging face, like a devil’s sick of sin;
If you could hear, at every jolt, the blood
Come gargling from the froth-corrupted lungs,
Obscene as cancer, bitter as the cud
Of vile, incurable sores on innocent tongues,
My friend, you would not tell with such high zest
To children ardent for some desperate glory,
The old Lie; Dulce et Decorum est
Pro patria mori.*

*It is beautiful and becoming to die for one’s country.

If there’s anything that Israel knows it’s that it isn’t beautiful and becoming to die for one’s country. It is, pretty much always, completely pointless. It’s obscene (not to mention wrong) to say that the deaths of any Israeli soldiers/fighters somehow paid for the existence of the State. The fighting, the wars accomplished something, but each individual death? No. To paint these–or any–deaths with the brush of patriotism is the ultimate act of hubris.

So many men and women died. It’s horrible. It’s horrifically sad. That’s all. 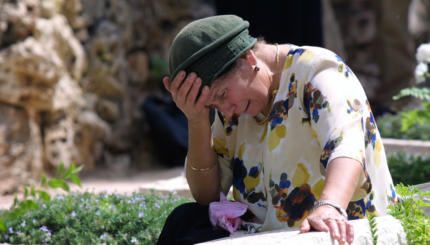 Yom Hazikaron in the USA: What Israel’s Memorial Day Can Teach Us About The Holidays

Remembering fallen soldiers is a weird thing. Personally, I find it difficult to really feel pain and sorrow for people ...