As of this morning, Wikipedia defines “macaroon” as “a variety of light, baked confections, described as either small cakes or meringue-like cookies.” Applying that definition to JDub Records’ new band the Macaroons is like referring to Godzilla as a reptile. They’re tasty — er, musically — but light and small are not adjectives I’d throw at their full-bodied blend of Buddy Holly rockabilly and Ramonesy stick-in-your-head punk.

The Macaroons’ Dan Saks is nothing if not versatile. He’s the lead singer/guitarist/everything else-ist of the non-kids band DeLeon, and, of course, a two-time G-dcaster. He’s also played with Os Mutantes, one of the finest bands in the world.

Here’s an mp3 from their new Passover mini-album. You can listen below or download it to play over and over again during Passover cleaning. Holiday kitsch aside, it’s actually a pretty good song. “Wash it off and then just eat it, yeah, just eat it.” (That line is especially ironic because, like many Hasidim, we have a tradition of not eating anything off the floor on Passover, mindful of the danger of acquiring residual chametz — just leave it, yeah, just leave it.) 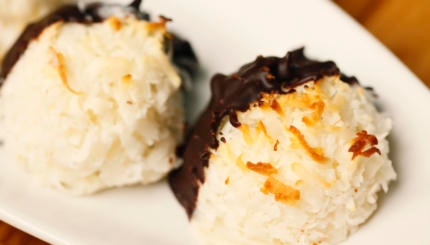