The Kominas Live: The Only Jew in the Room

I set up a reading with Michael Muhammad Knight, the author of the Muslim punk novel The Taqwacores — mostly, I confessed on stage, so that I had an excuse to meet him. My old religion teacher, S.H. Nasr, always used to say how different 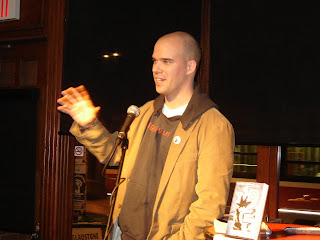 religions were just parallel paths to the same destination, but before I read Taqwacores, I was never convinced that anyone was taking a path remotely in the same direction as mine.

When I showed up, Mike and his friend were already there. He was apologetic — “I don’t think I’m going to read from Taqwacores tonight,” he said. “Not sure if that throws off the theme of the evening, or not.” Instead, he said he was going to read from Blue-Eyed Devil, his travelogue of Muslims in America. “There’s this ritual I’ve been thinking about,” he told us. “When Shi’a Muslims pray, you remember the battle of Karbala and remember the suffering of the third Imam, Imam Hussein, and you hit your chest.”

Sometimes, he said, the beating can get intense. People praying themselves into a frenzy have been injured, and sometimes killed. “There’s this part in Blue-Eyed Devil about the bed of nails,” he finished. “I think I’m going to read that while I administer the blows to myself.”

I nodded. I’m only a dozen pages into the book, but I knew what he was talking about. It’s just like the Jewish al chet prayers on Yom Kippur, slamming our fists into our hearts. Easy stuff. Divergent religions, comparable practices. Yay, Nasr.

And anyway, it wouldn’t be my first time with radical performance art. I mean, I spent five years living in San Francisco. Having a conversation with someone who was self-flagellating or immolating was practically coffee-table talk.

I went first. I read out of the sequel to my novel Losers, where Jupiter forgets it’s Rosh Hashana and then runs into God. It started out being about forgiveness and repentance, but somehow he ended up talking about having crushes on girls and checking out girls through the mechitza in synagogue. I can’t really explain it. That’s just Jupiter.

Then Mike got up to read.

He started reading about going to visit the grandson of Malcolm X, who was incarcerated at the time, and talking with him about Islam and prison life. Somewhere, he transitioned to talking about the Muslim al-chet prayer* and describing it being administered — it’s not just a simple fist-tapping-heart; you raise your arm up all the way, and then slam your palm into your pectoral muscle. Mike talked about people bleeding beneath their shirts. Others just ripped off their shirts to feel the full brunt of the blows. As he read, those people by the bar who were just ordering a sandwich began to order quieter; the line for the monologue show got a little less monologuey.

His voice was really picking up steam now. He pulled off his shirt. We almost didn’t notice; it seemed like the natural thing to come after talking about it.

Then he started to read about men throwing themselves down on a bed of nails — small nails, thousands of them scattered on the ground. Which is when he picked up a plastic bag and scattered a tiny golden rain across the floor.

We craned. Thumbtacks. Literally hundreds of them. He gave the bag a final shake, tossed it aside, and then threw himself on the floor.

When he came up, they were sticking to his arm in droves. They actually stuck to his arm, lining it, kind of like a He-Man villain, or like Dr. Claw on Inspector Gadget. Then he threw himself down on his other side.

Somewhere in between being introduced and when the reading started, I talked to Mike’s friend. When we met, he was eating the most out-of-control pasta I had ever seen, but he wore a purple silk shirt and managed to evade the volleys of tomato-sauce with gusto and aplomb. He told me that he was scripting the adaptation of Blue-Eyed Devil, a kind of meta-commentary of Michael Muhammad Knight on himself, exploring his own faith at the same time as he’s supposed to be writing an authoritative guide of American Muslims’ faith. It’s all pretty incredible. Before the event, Mike murmured, in what we thought at the time was a joke, “Maybe tonight’ll become a part of the movie.” Now, in that meta-meta-everythingle zone of retrospect, I’m not sure about the joke part.

Much later, we showed up to see Raz Hartman, the rabbi from our yeshiva, who was visiting from Israel. He was supposed to be giving a lecture in an apartment on the Upper West Side. As soon as I got off the elevator, I could hear a piano-drum-and-violin jam. I booked it down the hall. Rabbi Raz was perched at the piano, swaying like a spring hurricane in Kansas. He was shockeling, that back-and-forth motion you do when you’re praying, but wilder than anyone in America knew how. His fingers never left the keys, though, and like a tornado, he had a steady epicenter that he always returned to. It was a totally different kind of passion — not the kind that pierced you like pins, but that held you in place like pins.

* – whose name I can’t track down, although I found a fascinating article about the ritual itself

Rabbi Eric Yoffie’s speech at the Islamic Society of North America conference has been flagged by other Jewish leaders as ...

Generally, it’s not fun to see your friends fight, but when the fight is over the soul of Judaism, it’s ...

-As Jewish-Muslim interfaith efforts intensify, critics say that Council on American-Islamic Relations (CAIR) is selective in which acts of terrorism ...