The Cabalist’s Daughter is a bipolar sort of book. On one hand, it’s a crazy, unhinged vision of the Chabad-Lubavitch movement, starting with a wild supposition and growing steadily wilder from the first page onwards–what if the Lubavitcher Rebbe had a clone? On the other, it’s a pretty serious book that touches upon messianism, rape, global warming, peace in the Mideast, and those perpetually-impending nuclear crises that the news people are so fond of reporting about. 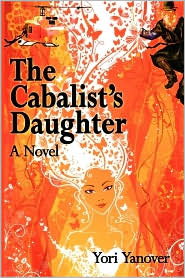 Of course, it’s not actually the Rebbe, and it’s not officially Chabad that’s being portrayed here — it’s the Cosmic Wisdom movement, a Hasidic group filled with “Cosmic Wisdomnik” rabbis with hospice houses spread out all over the world. The book opens with the leader of the Cosmic Wisdom movement, known only as the Cabalist, visiting the grave of the previous CW leader, his father-in-law, and having one of those supernatural rabbi conversations.

Soon after, the Cabalist has a heart attack. In the hospital, boys from the Cosmic Wisdom yeshiva keep a vigil over their leader and recite psalms, believing that, as long as there’s a Jew keeping watch, the Cabalist is safe from death. Of course, one of the boys falls asleep, and the Cabalist immediately dies — but, as the moment of death, the boy snatches a shirt with some some stray genetic material on it, runs it across the street to the Columbia University laboratory that his father funds, and instigates a procedure to clone the just-departed (and heirless) Cabalist.

Genetics being what it is, the cloning works — but, unexpectedly, the Cabalist’s clone is a girl. She’s taken in by one of his chief followers and raised, knowing that she’s adopted, but ignorant of her true parentage. At the age of twenty, however, her true nature begins to be revealed. First, at a brothel in Scranton, Pennsylvania, the unlikely Nechama (a near-anagram of Menachem, the name of both the fictional Cabalist and the real-world Lubavitcher Rebbe) makes miracles happen and heals the mentally and physically injured women there. She then travels the country helping the disadvantaged, giving strength to labor unions, and riling up the populace…basically, exercising her messianic powers and building up her stamina to fight against the powers of the devil, or Samael, whose minions soon come after her.

The promotional copy compares Cabalist’s Daughter to The Hitchhiker’s Guide to the Galaxy. In reality, it’s more similar to Neil Gaiman and Terry Pratchett’s novel Good Omens, a retelling of the Christian Apocalypse, both satirizing religion and complementing it. It’s like when you make fun of one of your friends, clapping him on the back and promising that everything is okay while knowing that, at the same time, knowing there’s an element of truth to the barb.

By most accounts, Yanover displays an intimate familiarity with certain leaders of Chabad. A few mistakes — sometimes trivial, sometimes glaring — occasionally make their way through: when Nechama’s adoptive father, one of the most hardcore Hasidim in the book, who kisses and touches her freely — which most Hasidic men wouldn’t do in public with their own birth daughters, let alone adoptive daughters, who, according to Chabad halakhah, are treated with the same stringencies as two unrelated people. Lengthy excerpts from the fictional Cabbalist’s Handbook for Practical Messianic Redemption — again, a massive hat-tip to Hitchhiker’s Guide — round out the story, digressing into sometimes-Midrash-based, sometimes fantastical apocrypha of Biblical characters and mystical techniques.

At times, Cabalist seems like it’s written for complete insiders, with its esoteric allusions and extended winks at the reader. But then you’ll arrive at footnotes, some of them necessary — and some of the explanations, among them Purim (Festival of Lots) and tefillin (phylacteries), more obfuscating than the words they’re supposedly defining.

But that’s just me nitpicking. For part of my criticism, I should issue a caveat: I’m not Lubavitch, but I have a lot of familiarity and family within the movement, including, if I’m not mistaken, one or two of the elder rabbis portrayed here. There’s something about watching your home turf fictionalized that’s both jarring and thrilling, and I suppose I’m reacting within that. As weird as it is to see both Chabad and Judaism given a clinical once-over within the confines of this book, it’s also really cool, like seeing an action movie shot in your home neighborhood. As the aliens land and military bases storm the streets and sidewalks, it makes you want to shout out in the theater: “Hey! That’s my sidewalk!”

And, indeed, when all Hell breaks loose in the second half of the story — starting with (spoiler!) a cool little East Village bar exploding, and continuing with an all-out bombing of the main street of Crown Heights — it almost fills the reader with a feeling of giddiness. Yanover has taken his time and arranged his chess game meticulously; now he’s smoothly, calculatedly blowing it up, piece by piece. And when the concepts and characters that seemed tedious at first are set in motion, piece by piece, it’s Glorious — both in the quotidian and Divine senses of the word — to watch.

Tomorrow, we’ll talk to Yori Yanover himself about his girl messiah, his ties to Chabad, and how it felt to blow up Brooklyn.

An Issue with Lubavitch

The new issue of the Jewish college student magazine New Voices just released its new issue, focusing on the world ...

Messianism in Chabad-Lubavitch challenges Jews of all denominations to consider the limits of Jewish theology.

Guess what? Yet another toy that we’re not giving my daughter.The pre-tween set is abuzz with the rumor that the ...