Aphrodite and the Rabbis Series: How the Jews Adapted Roman Culture

This is three-part class. Sign-up is allowed at any time.

Although 19th century anti-Semites dismissed Jews as “an artless people,” there are hundreds of examples of synagogue and funerary art from the period of the Talmud (70-600 CE). We will explore these images to see biblical interpretations in frescos and mosaics, and also see pagan motifs, even pagan gods(!), depicted in ancient synagogues. Together we will “read” the art to learn about our ancestors and their beliefs.

If you’ve studied Pirke Avot before, you know it is “wisdom literature,” not unlike the boy-scout manual. But if the boy-scouts represent a Protestant Ethic, then Pirke Avot represents Stoic Philosophy of the Roman Empire. We will see how this quintessential rabbinic work has a very comfortable place in the pagan intellectual world, much as Jews today have a place in America.

We will study two famous, early rabbinic texts about Aphrodite/ Venus to see how the goddess of love both attracted and repelled our rabbis. In the end, they sought a marriage of Torah and Hellenism to create rabbinic Judaism as we know it. We’ll also take a peek at that example of pagan Symposium literature we call the Passover Haggadah.

The Rabbi, The Philosopher and Aphrodite

The following exchange between myself and my students was a familiar one throughout my year long fellowship with Rabbis Without ... 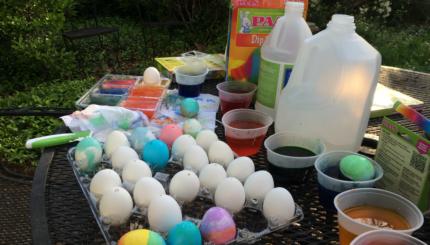 This past weekend, I took a "dip" into a colorful seasonal art project.

Accumulating Things Or, Then Again … Nothing

We read in Pirke Avot, the Ethics of the Sages: “Who is happy?” The answer: “The one who is satisfied ...