Traditions around food are something that is near and dear to my stomach (I mean my heart).  My childhood memories of holiday meals always included a Jell-O mold and a delicious coffee cake. My mother was an amazing cook and I like to think that the love of creating and providing food to family and friends is one way to carry on her legacy.

Memories aren’t just made at home – we spend plenty of time at work, too, so why not make those work memories a little sweeter? (Especially since I work at a Jewish office, this has been very doable!) This summer, I had a “legacy” moment from a bowl of … banana pudding.

Many of the ISJL staff members have not grown up in the South.  As we have new staff members joining our Fellowship program each year, we annually have an orientation dinner to welcome the team.  About 10 years ago, I thought it would be fun to make a Southern dessert, but with limited time and the idea of baking on a hot summer day, I decided banana pudding would be the perfect thing to bring. But as much I love banana pudding, I didn’t have a go-to recipe for it on hand.

So, confession time: I Googled it, and this is the one I found.

It was such a hit that I made it ever year after that for orientation and the occasional ISJL celebration. It became a “thing.”  Then, I started making it for my family – Father’s Day celebrations, family gatherings and it even became a birthday dessert request. Now, banana pudding was part of my family tradition, too.

Fast forward 10 years. One of our former Education Fellows returned to the ISJL to serve as Interim Educator for the summer.  As we celebrate birthdays by month, she requested, you guessed it – banana pudding.

The recipe is easy and I’m almost embarrassed when someone asks if I’ll have time or if I can make it for an occasion. I even put off writing this blog because I didn’t want to admit that it was a recipe I found online, not one passed down from a family member or something.

But after ten years of making it for every event, the dish is something associated with me. It’s become a staple, and a tradition, and if making it makes people happy and brings back a memory of a special time, it’s my pleasure. Even if I originally had to Google the recipe—it still counts, and the decade’s-worth of memories are just as warm and special!

A Dairy-Free Frosting with a Secret Ingredient

Making a creamy dairy-free (pareve) chocolate frosting just got way easier. No, it doesn’t involve margarine or tofu. Behold, the ... 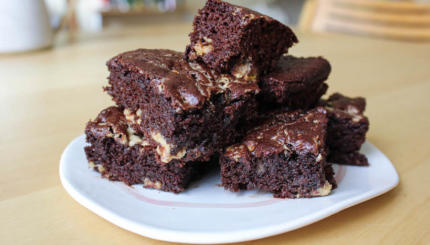 Gluten-free brownies–when made without those unpredictably tricky gluten-free flours–is the kind of dessert that speaks to me: fudgey, rich, and ...