The tradition of eating dairy products on Shavuot has ushered in an entire menu of delicious dishes. For Hungarian Jews, Shavuot often coincided with the country’s prolific sour cherry harvest.Ask someone with Hungarian ancestry about their favorite foods, and invariably sour cherry soup is among them. “We would eat it during the summer months,” said Miri Abraham, a friend of mine who used to visit her Hungarian grandmother, Emma, in Israel during summer vacations. “It was always part of a dairy meal.”

Most recipes use a thickened mixture of sour cream and flour to lend the soup its signature pinkish-purple color. Sour cherries are at their peak towards the end of spring, and have a shorter season than sweet cherries. Luckily, jarred varieties (which are better than canned) are available all year, and are relatively easy to find.

Serve this soup as a sweet first course, or as a refreshing alternative to heavier desserts.

While mixture is simmering, combine 1 cup sour cream and flour in a medium-sized bowl with a whisk and reserve. Remove cherry liquid from heat, remove lemon zest and cinnamon, and cool slightly, about three minutes.

Remove from heat and chill at least two hours. Ladle into bowls and top with additional sour cream, if desired. 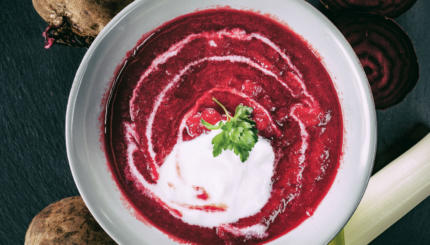 Beyond borscht, Jews all over the world have a tradition of seasonal chilled soups for summer.