Earlier this week, June Hersh wrote about her perfect day, her Jewish culinary journey and unraveled the mystery of Jewish food. She will be blogging all week for Jewish Book Council and MyJewishLearning‘s Author Blog.

As a New Yorker, I brave the cracked pavement, dodge the deliverymen on bicycles and boast of my worn MetroCard. But there is one mode of transportation that, while costly, can be more than a way to get from point A to Point B. I relish my place firmly seated and belted into the back of the iconic yellow New York City cab. I proudly raise my hand, a little sweaty in the sweltering summer heat or snuggly gloved on a cold winter’s day, to hail the cabs that whiz by. I am that rare passenger who notes the driver’s name not because I am sure I will have to report him to the taxi and limousine commission, but because I want to engage him in conversation and knowing his name makes our ride more personal and relatable.

So what do we talk about? Invariably politics arises, as most of the cabbies hail from somewhere else and came to America for a better life. They are at the same time grateful for America welcoming them and vocal about the mishandling of many current issues. The typical cabbie has the radio on the entire day and their stations seem to hover on talk radio where they are inundated with political views and pundits weighing in. I find that whether they moved from West Africa to West Harlem or Jamaica in the Caribbean to Jamaica Queens, they have focused opinions and a clearer understanding of how politics function (or don’t) than they do of which route is faster and cheaper.

While I too am fascinated with current events, I find my conversation always turns to food. The intriguing accents prompt me to ask, “where are you originally from?” I have met drivers from just about every region Rand McNally can map. There is no doubt that there are a disproportionate number of drivers from Pakistan, India, and Middle Eastern countries. From kippahs to turbans, the drivers represent their region with pride. On one short ride from the Upper East Side to midtown Manhattan I had the pleasure of talking to a Jewish cabbie who immediately sensed I was Jewish as well. We talked about children and parents and then I slipped into the conversation that I had just completed writing a cookbook called
The Kosher Carnivore
. “Ah,” he said, “you are the perfect person to end a debate for me.”

“Happily,” I replied. He began to tell me that for years his wife would prepare kosher chicken for Shabbat. When he would offer to stop at a regular market to buy a bird, she would reply adamantly, “it needs to be a kosher bird.” “Why?” he would ask, “we’re not kosher.” “Oh,” she would reply, “what do you know? My mother tells me it’s a better bird.” He then asked me for my informed opinion.

I was in a position to settle an argument that had endured for decades. I could bring glory to the driver who was right in saying it didn’t matter or lend credence to his mother-in-law who felt it decidedly did. What to do, what to do??? I find the truth and the facts always work best, so I replied with clear conviction. “A kosher chicken is superior!”

That’s not only my professional opinion, but a conclusion reached by America’s test kitchens and published in their magazine
Cooks Illustrated
. After testing a number of well-known brands, they concluded without a doubt that kosher chickens are the best. It makes sense. After all, kosher birds are essentially brined as a result of the koshering process and while they can be a bit more feathered and in need of electrolysis when you get them home, they are definitely plumper and juicier.

He looked a bit dejected and sorry that he ever brought the discussion up. I told him he would need to make peace with both his wife and, more humbling, with his mother-in-law. He then shared with me that his wife had passed several years ago and his mother-in-law long before that. He now felt he owed them both an apology that was impossible to deliver. I apologized for enlightening him and ending the debate not as he hoped I would. He chuckled and said, “at least the next time I go to Scarsdale for Shabbat dinner at my daughter’s, I will be sure to tell her I can stop at the kosher butcher to pick up the chicken. She will be so impressed that I knew instinctually which bird to buy!”

Grab your dictionary and you’ll find that spatchcock is a method of splitting (butterflying) achicken. It’s a fun word, which you can use to impress your friends or win at Scrabble. If time is crunching, but you want to make a crispy, flavorful roast chicken, butterflying is a great option.

Behind the Counter
Have your butcher, butterfly the chickens. You can do this yourself by removing the backbone and pressing down on the breast till flat.

Dry the chicken and place the bird on a paper towel-lined plate, refrigerate, uncovered for 1 hour. This can be done earlier in the day, cover the chicken if it sits longer than an hour. When ready to roast, preheat the oven to 425 degrees, and take the chicken out of the fridge. Drizzle olive oil over the chicken and season both sides with salt, pepper and paprika.

For the leeks, remove the tough green ends. Split the leeks down the middle lengthwise, andthen cut them lengthwise again. Rinse them thoroughly under cold running water, pat dry. Donot separate the leeks into strands, they roast better when they are left intact.

Place the leeks, rosemary and thyme in the center of a roasting pan. Lay the chicken, skin side down on top of the leeks. Sprinkle the carrots, parsnips, garlic and celery root around the chicken. Drizzle a little olive oil over the vegetables and season with salt and pepper. Pour 1 cup of stock into the pan.

Roast at 425 degrees, uncovered, for 20 minutes. Using tongs, turn the chicken over and continue roasting for 20 minutes longer. Position the legs so they slightly cover the breast, this will help the legs brown while preventing the breast from overcooking. Baste the chicken with the collected juices, and roast until a meat thermometer inserted in the thigh portion reads 160 to 165 degrees. Remove the chickens to a plate, and cover loosely with foil. They will gain 5 to 10 degrees while resting.

Remove the vegetables with a slotted spoon and cover to keep warm. Remove the garlic cloves and squeeze the garlic from each clove, into the roasting pan. Discard the outer skins. Take the roasting pan and place it on the stove. Skim off some of the fat, and then add the remaining stock, wine, lemon and 1 teaspoon of cornstarch. Whisk to pick up any brown bits in the pan and incorporate the ingredients, being sure to mash the garlic into the sauce. Heat the sauce until it thickens. Spoon the sauce over the chicken and vegetables and serve.

June Hersh has been blogging all week for MyJewishLearning and the Jewish Book Council’s Author Blog. Her new book is The Kosher Carnivore.

A friend recently reached out because she decided to slowly introduce meat back into her diet after being a vegetarian for ... 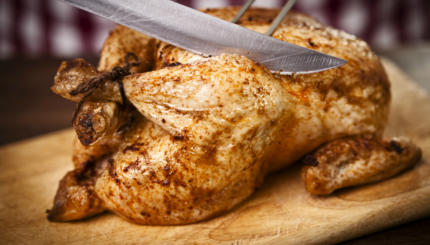 A recipe to wow your friends and family.