Table hymns sung during or immediately after Sabbath meals are called zemirot. These medieval songs represent a unique blend of the holy and the secular, the serious and the playful, and allow family and friends to enhance the Sabbath experience.

Below is information about some of the most popular Shabbat songs, followed by videos of them with the words in transliteration, so you can practice singing them.  Find a searchable database of Shabbat song recordings and lyrics here.

The most famous of the zemirot is “Shalom Aleichem” (Peace be upon you), which traditionally is sung as the family gathers around the table on Friday night to welcome the “angels of peace.” This hymn, and believed to have been written in the 17th century, was inspired by talmudic legend (Shab. 119b).

After extending our wishes for peace to the ministering angels “of the Most Exalted, the Supreme King of kings, the Holy One, blessed be He,” in the final three verses we successively pray “May your coming be in peace,” “Bless me with peace,” and “May your departure be in peace.”

Most zemirot were composed by the kabbalists, who considered it proper to chant table hymns in honor of the spiritual guests visiting the Jewish home on Sabbath eve. Among those authors whose zemirot are still sung in Jewish homes was Isaac Luria, the master kabbalist, who composed table hymns for each of the three Sabbath meals.

The most popular of these, Yom Zeh l’Yisrael (This day is for Israel), describes a mixture of spiritual and physical pleasure, a divine commandment coupled with bodily enjoyment that concludes with a vision of the messianic age when life will become one great Sabbath. The second verse refers to the additional soul that is given to each Jew on Friday evening and then taken away when the Sabbath ends (Taan. 27b).

Another major liturgic poet belonging to the Safed circle of mystics was Damascus-born Israel Najara, who wrote 650 hymns, the best known of which is Yah Ribon Olam (God, Master of the universe). This table hymn is written in Aramaic and has the author’s first name as an acrostic formed by the opening letters of the verses. The song praises the glorious and powerful “King who reins over kings” whose “powerful and wonderful deeds it is beautiful to declare.”

It continues by extolling God as the Creator of all life and a worker of wonders. Finally, it concludes with a request that God redeem the Jewish people from exile and allow them to rebuild the Temple in Jerusalem, “the city of beauty.” It is interesting that the song does not mention the Sabbath at all.

Yom Zeh Mechubad (This day is honored) urges Jews to observe the Sabbath for God will provide those who do with everything they need to enjoy the day–the ceremonial wine for Kiddush; two loaves of hallah; meat and fish, rich foods, sweet drinks, and “all appetizing things”; and even proper clothes to wear.

It is based on the Talmudic statement promising that all Sabbath expenses would be restored: “The Holy One, Blessed be He, said unto Israel: ‘My children, borrow on My account and celebrate the holiness of the day and trust in Me, and I will repay'” (Betz. 15b). The refrain to the six stanzas is a reminder that “This day is honored more than all other days, because on it the Eternal rested.

Words to “Yom Zeh Mechubad,” along with multiple audio recordings of it, can be found here.

Tzur Mishelo (literally, “Rock from whose store [we have eaten]”), is an anonymous hymn that introduces the Birkat hamazon on the Sabbath. The refrain recalls the invitation to the Grace after meals, while the four stanzas summarize the contents of that prayer-praising God for providing food, giving thanks for the “good land” bequeathed to Israel, and asking God to have mercy on the Jewish people and restore the Temple and the kingdom of David.

By the 16th century, the singing of zemirot at Sabbath meals had become a widespread custom. In addition, special zemirot were sung in honor of the departing Sabbath Queen as the day grew to a close. These table hymns, whose melodies were usually borrowed from folk songs, Jewish and non-Jewish alike, have remained popular to this day. Many Jewish families sit around the dinner table for hours joyfully singing them.

The masters of Kabbalah explained all of the elements of the Sabbath rituals as a consistent thematic drama of the reunion of the Shekhinah the Sabbath bride, with her mate--and in so doing exerted considerable influence on the shape of those rituals. 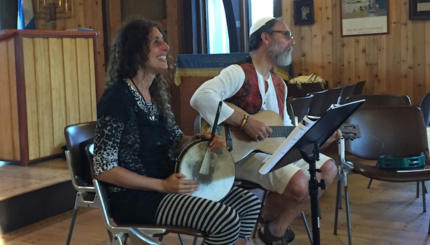 This hymn, sung to welcome the Sabbath, has mystical origins.