Jewish Ideas of Peace and Nonviolence

Reprinted with permission from “After the War–Another Look at Pacifism and Selective Conscientious Objection,” in
Judaism
, volume 10, number 4 (1971).

[P]acifism absolutizes the concept of peace. In Judaism no value is considered absolute. Only God is absolute–He is Almighty and All-­Wise and the Creator of all. Everything else in the world is relative to the absolute that we call God. When we transform a relative into an ab­solute, we create an idol.

When the ancients worshipped the stars rather than the Creator of the stars, or the Nile River rather than Him who made the river flow, they made a relative object into an absolute. They were worshipping an idol.

Idols, obviously, are not only the fetishes that were worshipped by the primitives. Even concepts and values, when they are transformed from the relative to the absolute, become idols.

Generally, from the primitive totem to the latest concept, the items that are absolutized and made into idols, are, for the most part, not evil things but good ones. Thus, we find in the Midrash that the elders of Rome placed the question before the rabbis: “Why, if God detests idols, does He not destroy them?” Their response was that the idols which the ancients worshipped were mountains and trees and stars and rivers. Should God destroy the good simply because it is worshipped? If He does so, would He not have to destroy the world?

It is clear that even the highest of values are not absolute. For example, life is a primary value. Yet who doubts that a loving mother standing by her sick and dying child would not wish that she, rather than her child, would be dying? A mother is willing to sacrifice her life for an ideal higher even than the value of life itself.

Freedom, too, is a value, but not an absolute. A part of it must be surrendered in order to achieve social cohesiveness. If people were free to do everything they wished, they would have no orderly society–only anarchy. Even truth, which surely ranks high in any hierarchy of values, must sometimes be modified into the “white lie” even if only for the sake of frictionless social intercourse.

Interestingly, Rabbi Menahem Mendel of Kotzk interpreted the verse “Take heed…lest you make a graven image, even the likeness of anything which the Lord thy God hath commanded thee” (Deuteronomy 4:23), to imply “do not make an image, an idol, out of any mitzvah [commandment] which God commanded you.” No mitzvahshould be considered absolute unto itself, but relative to the God who commanded it.

Not only do absolutized good concepts become idols, they can become positively demonic.

Thus, a good such as order when it is absolutized, becomes tyranny; liberty can become licentiousness; loyalty can degenerate into collaboration with tyranny; parental respect can be transformed into ancestor worship; science can become a goal and not an instrument, a deity that commands unmercifully instead of a tool; justice unmodified by compassion can become a destroyer of God’s house; love, absolutized, can become a destroyer of God’s world. The crusader of medieval Europe and the Grand Inquisitor of Spain killed people for the sake of love of God.

Thus, we may understand why the Talmud always bracketed idolatry with immorality and bloodshed.

Pacifism is the Idolizing of Peace

If nothing is worth fighting for, if everything must be subordinated to peace, then peace is an absolute, an idol. If a man says: “I will sue for peace regardless of the circumstances,” and thereby increases the possibility of losing justice and freedom which took thousands of years of history to produce and refine; if a man is willing to sacrifice religion and equality and liberty and homeland for the sake of physical survival, then he has made of peace an unsatiable, satanic idol.

This idol is a moral outrage, also, because it can induce people to con­sider only one thing worthwhile–physical survival. And if that is the goal on the international scene, what havoc will be wrought within our own society when our children grow up with the concept that physical survival, peace, is the only value worth living for?

Pacifism, therefore, is an idea that flies in the face of the Jewish spirit. Strange as it may appear, to a people whose life and literature are saturated with the passionate pursuit of peace, pacifism is something of a moral aberration. 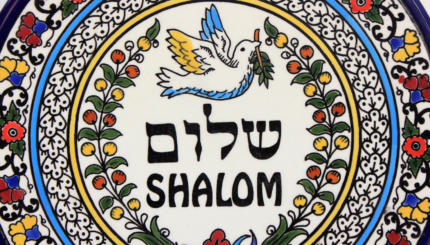 Have Israeli and U.S. attacks been ethically justifiable?

Genocide in the Torah

The existential threat of Amalek.