When many of us think of gender equality in Israel, we envision the strong Israeli pioneer woman, working the land and defending the fledgling state alongside men. The ideal of gender equality has been a cornerstone of Zionist ideology since before the foundation of the state. However, the reality in Israel today is far from this ideal, particularly in Israel’s public life.

Equality between the Sexes

Many early Zionists strived for equality between the sexes in all areas of life, including politics. The early Kibbutz movement, which was central to the establishment of the Jewish state, had gender equality between the sexes as a key goal. The founding members of the Kibbutz movement believed that they were building a new society, free of the old patriarchal institutions of marriage and family, where there would be sexual freedom and the community would raise all children. Women, no longer limited by their traditional roles as wives and mothers, would work beside the men in the fields, fight beside them in the army, and serve as political leaders.

Even from the beginning of the movement this value was far from the reality. Many kibbutzim quickly reverted back to the traditional family structure, in which a husband and wife raised their own children. Women were seen as too weak to do heavy agricultural work, and returned to jobs traditionally associated with women, including education and social welfare. Although some women participated in kibbutz politics, they did so in far smaller numbers than men, and they tended to serve in positions that were far lower in the political hierarchy.

In keeping with the ideals of gender equality on which the country was founded, legislation on women’s rights in Israel is among the most advanced in the world. Women’s suffrage was granted in the Yishuv, the Jewish self-governing authority in Palestine of the British Mandate period, at about the same time as the United States, 25 years before the establishment of the state. Israel’s Declaration of Independence specifies that “The State of Israel will maintain equal social and political rights for all citizens, irrespective of religion, race, or sex.”

In 1951, the Women’s Equal Rights Law was passed, prohibiting legal and social discrimination against women (although matters of personal status remained under the jurisdiction of the rabbinical courts). In 1975, Prime Minister Yitzhak Rabin appointed an ad hoc Commission on the Status of Women, which presented its recommendations in 1978. These recommendations led to the institution of several governmental units designed to promote women’s equality.

In the 1990s, with the establishment of primaries to select parliamentary candidates, women’s issues rose to prominence in the legislature, as candidates realized that promoting women’s issues was in their best interest politically. This led to the initiation of legislation aimed at promoting women’s concerns that had not yet been addressed by earlier legislation, including the establishment in 1994 of a sub-committee on the status of women, the 1991 Prevention of Violence within the Family Law, and the 1995 affirmative action legislation directed at the civil service.

Yet this progressive legislation sharply contrasts with women’s actual role in public life. In the state’s history, women have been vastly underrepresented in all levels of Israeli politics, from the cabinet to local government. In recent years, however, there has been some progress, particularly in the Knesset.

Between the founding of Israel in 1948, and the fourteenth Knesset in 1996 only 6 women served in the cabinet of Israel. In 2011, only three out of the 30 cabinet ministers are women.

The most significant exception regarding women’s leadership in Israel’s cabinet is, of course, Golda Meir, who served as Israel’s prime minister from 1969 to 1974. Golda Meir is often seen as the symbol of women’s equality in Israeli politics. Meir, however, did not promote women’s interests in her legislative activity, and did not appoint any other female ministers. She took pride in her description as “the only man in the cabinet,” and did not see herself as suffering from discrimination on account of her gender. In her autobiography, My Life, she asserted that, “being a woman has never hindered me in any way at all.”

She also took care not to repudiate traditional gender expectations by focusing on her role as mother and homemaker. Her book includes many photographs of her strolling with her baby grandchild, and her famous kitchen was a meeting place where many critical state decisions were made. Other women in the Israeli cabinet have followed Meir’s example by promoting their general political interests rather than focusing on women’s interests.

In recent years, women have increasingly risen to positions of leadership in the Knesset. In May 2006, Dalia Itzik became the first female Speaker of the Knesset. In late 2008, Tzipi Livni became the leader of Kadima, the Knesset’s largest party, and, following the 2009 elections, the Opposition Leader in the Knesset. Women are also beginning to serve on more powerful committees. Until 1984, there were no women members of either the Foreign Affairs and Security Committee, or the Finance Committee, but there have been women on both committees recently. Yet the number of women on these committees still remains small.

Women are also underrepresented in local government, although there has been a steady increase in the percentage of women in local councils. Between 1948 and 1996, only three women have served as mayors of municipalities. In 2011, sic out of 154 mayors of cities and town in Israel are women. The number of women in local politics has increased steadily, from 4.2% of local representatives in 1950 to 15% in 1998. In addition, close to 60% of employees in Israel’s civil service and public sector are women, though they tend to be concentrated at the lower levels of the hierarchy.

Women often participate in political parties, and most parties include a women’s division that promotes women’s interests within the party. Women, however, are underrepresented in the party’s leadership. Many of the major parties have instituted internal standards regarding the percentage of women in leadership positions, but these standards have not been applied to the party lists for Knesset elections.

Why are women underrepresented on all levels of Israeli politics? Naomi Chazan, former Knesset member, argues that the political structure itself makes it difficult for women to rise to power. In Israeli politics, politicians tend to advance through the political parties, the army, and the local government, all of which lack proportional representation by women.

But why is there such a low percentage of women in all of these institutions? Chazan also attributes the lack of women leaders in Israeli public life to Israeli culture’s emphasis on the traditional family. Particularly in their child-rearing years, women are encouraged to focus on home and family, rather than pursuing demanding careers. As a result, by the time women would begin to enter politics, they are at a significant disadvantage to their male counterparts, whose political careers are well under way.

Yael Yishai, in Between the Flag and the Banner: Women in Israeli Politics, explains that Israeli society pressures women to place the interests of the country over those of women as a particular group. Israel is a nation built on a well articulated collective vision, both as a result of its unique ideology as a Jewish nation-state, and its constant coping with external threats. This vision demands devotion from its adherents, often at the expense of their particular subgroup. Women, therefore, are encouraged to contribute to the collective national vision rather than the particular feminist vision. Their role in the national vision, furthermore, has often been limited to being supportive and nurturing wives and mothers.

What can we expect in the coming years for women in Israeli politics? The trends in the last several years give some grounds for optimism, with increasing numbers of women in top leadership positions. Yet Israel still has a long way to go before it can successfully realize the ideal of equality of men and women. Entrenched cultural assumptions and the political structure itself remain barriers to women’s full participation in all levels of Israeli politics.

Fringe groups are all the rage in Israeli politics. 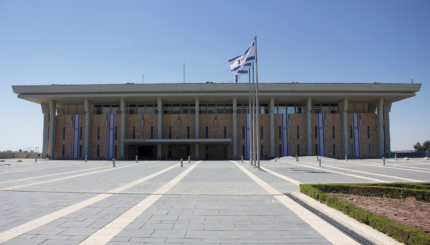 Why Does the Israeli Knesset Have 120 Members?